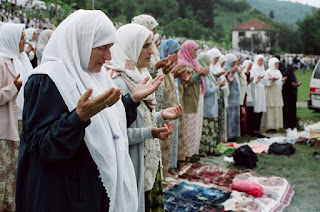 A group of women from the tribe of Ghifar approached the Prophet Muhammad ﷺ to seek his permission to tend to the wounded during the battle of Khaybar. The Prophet ﷺ welcomed their request, giving them permission, stating, “By the blessings of God.”

He ﷺdidn’t simply say okay dismissively. He didn’t say, “No. This isn’t for women.” Or, “Why are you trying to with men?” Instead, he specifically gave them the blessings of God.
With this group of women was a young girl named Umayyah bint Qays. She shares with us her own part of the story:

“Then we set out with him. I was a young girl. He made me sit on his she-camel behind the luggage. I saw the bag had got traces of blood from me. It was the first time I had a period. Then I sat forward on the camel [to hide it] and I was embarrassed.

“When the Messenger of God ﷺ saw what happened to me and the traces of blood, he said, “Perhaps you have had menstrual bleeding?” I said, “Yes.” He said, “Attend to yourself. Then, take a container of water, then put salt in it, then wash the affected part of the bag, then come back.” I did so.
“When God conquered Khaybar for us, the Prophetﷺ took this necklace that you see on my neck and gave it to me and put it on my neck with his own hand. By God it will never be parted from me.’
“She wore the necklace her entire life and stipulated that she should be buried with it.”
When the Prophet ﷺ saw her blood, he did not embarrass her. He ﷺ did not turn away in disgust or shock. He ﷺ didn’t order her to leave his presence now that she was an accountable young woman. Or hastily walk away in silence, and then avoid her for the rest of her life.

Instead, he ﷺ taught her the fiqh of purification in that moment. He ﷺ acknowledged her literally going through puberty in front of him ﷺ with gentle humility and support. He ﷺ gave her a necklace, which he ﷺ personally placed on her with his blessed hands, and helped her feel honored and special in that moment. He ﷺ didn’t tear her down emotionally; his ﷺ response built her up.
I’ve heard many period stories where women speak of incredible embarrassment in the moment but can laugh it off 10-15 years later. But I’ve never heard a story in which a woman says she felt closer to God because of what was a humiliating moment of her life as a young person.

The way he ﷺ responded not only impacted this young companion’s sense of self, her self worth, her self esteem- but also, her relationship with Islam. He did this while leading a military expedition! As the head of state! Yet he ﷺ took time to sit and make a little girl at a critical crux of her life feel seen.
The Prophetﷺ mentored people in ways they felt nurtured, cherished, and critical for the community. How do you think that impacted the way they felt about their faith?
How would it impact ours if we did the same?