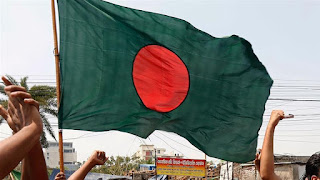 Palestinian activists are mourning the loss of Saiful Azam, 79, a Bangladesh fighter pilot who died of natural causes in the capital, Dhaka, on Sunday.

Azam, also a former legislator from Bangladesh's mid-northern Pabna-3 constituency, was regarded as a legendary figure for Bangladeshi people, thanks to his record as an ace fighter pilot.

How the US and Israel exchange tactics in violence and control
A unique figure in the history of Bangladesh, Azam fought in wars as a fighter pilot in three different countries - Jordan, Iraq, and Pakistan.

During the 1967 Six-Day War, he was the only pilot to have downed four Israeli aircraft.

"Our brothers in Bangladesh and Pakistan were our partners in resistance and defending the Al-Aqsa Mosque," the holy site in Jerusalem, he added.

"Saiful Azam loved Palestine and fought for the sake of Jerusalem," said Shoukri, saluting him and wishing him God's grace.

In recognition of Azam's contributions, he was conferred with military awards by Jordan and Iraq. The United States also gave him the Living Eagles title in 2001 for his outstanding skills.

After the independence of Bangladesh in 1971, the veteran pilot joined the Bangladesh Air Force to serve his homeland. In 1980, he retired and joined the civil service and later took up a political career.

"He is a source of inspiration for every soldier in the battleground on how to defeat the big enemy with limited weapons. He set a milestone in optimum use of skills and courage during war," Rahman said.

Born in a remote area in Bangladesh’s central district of Pabna in 1941, he spent his childhood in the Indian city of Kolkata with his father. After the partition of the Indian subcontinent in 1947, his family migrated to Bangladesh (then East Pakistan).

According to the South Asia-based analytical website Roar Media, Azam left home at the age of 14 for higher secondary education in then West Pakistan (now Pakistan). In 1958 he was admitted to Pakistan Air Force Cadet College, where he completed his education as a pilot officer.

Popular defence blog Fighter Jets World also recorded that after learning the fundamentals of aviation in Pakistan, Azam was sent for advanced air combat training at Luke Air Force Base in Arizona.

During the 1965 India-Pakistan war he also downed an Indian warplane, encouraging Pakistani forces to stand against India with limited warfare tools.

The act was widely applauded in Pakistan, which awarded Azam Pakistani's Star of Courage (Sitara-e-Jurat) medal, the third-most prestigious award of its military.