Hadiths of the day; Do good 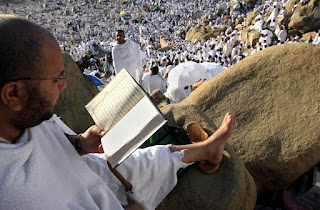 Verily, God will not change the condition of a people until they change that which is within themselves." The Holy Quran, 13:11

The Prophet Muhammad (PBUH) said: "Do not be people without minds of your own, saying that if others treat you well you will treat them well, and that if they do wrong you will do wrong. But (instead) accustom yourselves to do good if people do good and not to do wrong if they do evil." Al-Tirmidhi


The Prophet Muhammad (peace be upon him) said: "Shall I not inform you of something more excellent than fasting, prayer and charity?. . .It is putting things right between people." Sunan of Abu-Dawood

A person once asked the Prophet Muhammad (peace be upon him) who is the best of humankind. The Prophet replied: "A person whose life is long and whose deeds are good." The Prophet was then asked which deed is best. He responded by saying: "That you should leave this world with the mention of God fresh on your tongue." Al-Tirmidhi
Posted by Zafar Khan at 09:00