She Went to Prison for Killing Her Husband. The Pandemic Set Her Free. 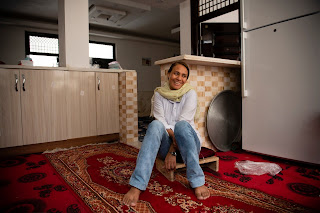 On a Thursday morning in May, three days after Foroozan was freed from prison, she left her mother’s house to go to the market. It was the first time in six years that she had set foot on the streets of Herat, the capital city of a province of the same name in western Afghanistan. As she made her way through crowds of men wearing masks, she became lightheaded, as if “the world was revolving around her head.” It was nothing like how she had imagined it. “When I was in prison, I thought the outside world is heaven and those who are released, they’re on their way to heaven,” she said. But now, finally experiencing it for herself, she found it alienating and even frightening. “I thought everyone was staring at me,” she said. “Pointing their fingers toward me while whispering, as if they knew I was a prisoner, but of course it was all in my head.”

Foroozan was in the 10th grade when her family arranged for her to marry a man who was 25 years older. He was prone to violence, and for 15 years, she endured his physical and verbal abuse. One early morning, though, he directed his aggression at one of their two daughters. Foroozan grabbed a shovel and hit her husband repeatedly with the blade until he died. When she turned herself in to the police, her 12-year-old son, Maqsood, stepped forward, saying that he had helped his mother with the killing. Foroozan was charged and found guilty of murder and sentenced to 10 years in prison. Maqsood was sent to a juvenile rehabilitation center for two and a half years, and his sisters, Mozhdah and Mahtab, 9 and 7 at the time, were sent to a safe house.

Foroozan was one of as many as 20 women incarcerated in Herat Women’s Prison for killing their husbands. Many of them had been in abusive relationships, until the instinct to survive or to protect their children drove them to kill their abusers — and they ended up in prison with lengthy sentences with little chance of an early release. I first visited the facility in 2019, and most of the women told me they felt safer and more free in prison than they had at home with their families.


Many of these inmates have since been freed, after President Ashraf Ghani ordered the release of thousands of prisoners — mostly women, juveniles and sick people — to prevent the spread of the novel coronavirus. Eligible inmates were notified to pack their belongings and wait in the courtyard. Foroozan joined them, listening as a few names were called out. Those lucky prisoners were released, but after hours of waiting, Aalia Azizi, the prison manager, told the remaining women the bad news: “No one else is going home today, there has been a mistake.” Azizi didn’t know what the mistake was, only that she had clear instructions not to release anyone else.


The next day, the prison erupted into chaos. A group of angry inmates tried to smash through the bulletproof entrance gate and shatter the prison’s windows. The children’s playground was burned down, and a dozen inmates were hospitalized, some with serious injuries after swallowing broken glass as an act of protest. They had been promised freedom, and they were refusing to give it up. The violent demonstrations continued, and the prison, which was previously a relatively safe and peaceful sanctuary compared with the homes many inmates came from, fell into discord. Some prisoners went on hunger strikes, and others attempted suicide, all demanding their release.

Eventually the government offered a solution: If the women wanted to leave, they could buy off the remainder of their sentence with approval from the prosecutor’s office. Foroozan, desperate to reunite with her children, borrowed a little more than $1,000 from her relatives and paid her way out. She was released on May 11.


“Thanks to coronavirus, I am given a second chance to live,” Foroozan said. “To get out of the prison early and start a new life with my daughters at my side.” Mozhdah and Mahtab, who are now 15 and 13, described the last two months as the toughest period in all the years they were apart from their mother. “During the quarantine we were allowed only one phone call per month,” Mahtab said. “We couldn’t go to school, we couldn’t come home to our grandma and we couldn’t visit our mom. They had imprisoned us as well.” She cried as she spoke.


Foroozan and her daughters are together again, but the grim realities of being a woman in male-dominated Afghanistan hang over their daily lives. Inside the prison, Foroozan was able to earn a small income as a tailor, sewing dresses and repairing clothes for the guards and inmates, but in Herat she won’t be able to find a job anytime soon. The pandemic has disrupted the Afghan economy and left millions of people out of work.

The last of Foroozan’s savings went to pay a smuggler to get Maqsood out of the country after he was released from detention three years ago. He is currently in Germany, where he traveled by foot at just 14 years old after being released. In January, his asylum request was rejected by German authorities. His lawyer has appealed the case, but he could be deported back to Afghanistan when he turns 18 this year.

At her mother’s house, in between joyful moments and loud laughter with the girls, Foroozan is often dazed, lost in her thoughts, a dark world of uncertainty. Her husband’s family members have repeatedly threatened her and her children’s lives, promising revenge for his death.


One afternoon, Mahtab asked if she could go out to buy ice cream. Foroozan raised her eyebrow but bit her tongue and said yes. As Mahtab was going down the stairs, Foroozan ran after her, handing her a surgical mask: “Don’t touch your face and make it quick!” Once again, she is single-handedly protecting her children: protecting them from the virus, her merciless in-laws, a raging war and a patriarchal society that doesn’t welcome her or her daughters.

As she watched Mahtab disappear in the corridor, she whispered: “Inside the prison I had one problem. Now out here, I have a thousand.”