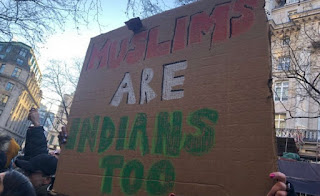 Some members of Canada’s Indian diaspora echoed such sentiments, tweeting comments about how the prayer call broadcasts are part of an Islamist “strategical campaign through out the world” or that “blaring loudspeakers” can never be “peaceful.” Several of the tweeters have quietly lost their jobs since then, amid pressure from anti-hate groups.

But few cases have garnered much attention. The exception is that of Ravi Hooda, who sat on a regional school board in the Toronto area and tweeted that allowing the prayer calls to be broadcast opens the door for “Separate lanes for camel & goat riders” or laws “requiring all women to cover themselves from head to toe in tents.” When Hooda’s tweet was called out by the Canadian Anti-Hate Network, a Twitter war ensued. Dozens of pro-Indian accounts, often with usernames containing an eight-digit string of numbers—a common indicator of a bot account—came to Hooda’s defense. A local controversy instantly took on an international character.

Hooda, for his part, is a volunteer for the local branch of the Hindu Swayamsevak Sangh, which represents the overseas interests of the Rashtriya Swayamsevak Sangh (RSS), the right-wing Hindu nationalist organization that promotes the Hindutva (literally, “Hindu-ness”) ideology that India is a purely Hindu nation at its core. Modi himself is a lifelong RSS member, and a majority of his ministers have a background in the organization. The Hindu Swayamsevak Sangh opened its first chapter in 1947, in Kenya, and today has more than 500 branches in 39 countries. The group’s chapters are called shakhas (branches) and, in addition to offering community services, help organize the diaspora through lectures, camps, and other organizational sessions that are aligned with the RSS’s ideological outlook.

The spread of right-wing Hindu nationalism in Canada has allegedly dovetailed with efforts by Indian intelligence agencies to “covertly influence” Canadian politicians to support Indian government positions through disinformation and money, according to documents obtained by Global News. There’s no proof of how successful this lobbying has been, but it’s clear that New Delhi is stretching its global reach at the same time that the BJP’s rhetoric and actions have politicized a new generation of Indian expats.

A glimpse of this global reach was provided by the EU DisinfoLab last fall in a report detailing a network of over 260 pro-India “fake local media outlets” spanning 65 countries, including throughout the West. The media organizations bear the names of local towns and cities, but none of them has any real connection with the localities they purport to represent, and all feature pro-India and anti-Pakistan content. Every news site was registered by the Srivastava Group, an Indian corporation that last year took right-wing European politicians on a trip to Kashmir, where they met with Modi.

Such reach can also be seen in the efforts of Indian expats and Indian Americans in the United States who organized last fall’s “Howdy, Modi!” event in Houston attended by 50,000 people, including U.S. President Donald Trump and other Republican and Democratic politicians. Indian American volunteers did the heavy lifting and funded the event, which turned a meeting between heads of state into a public spectacle. The event was meant to cement Trump-Modi relations as well as to rally the U.S.-based diaspora around the BJP, thus bolstering the prime minister’s popularity back home.

Similarly, foreign governments remained largely silent last summer when Modi stripped Muslim-majority Jammu and Kashmir of its special status and placed it under a brutal military lockdown. This had observers wondering whether “Hindutva-inspired lobbies in the West,” as the researcher Fareeha Shamim labeled them, succeeded in their goals of building global influence from the ground up. Liberal politicians now hold an uncomfortable position, reluctant to criticize Modi lest they be attacked by his supporters in the diaspora.