Relax, Malala's jeans aren't an assault on your national identity 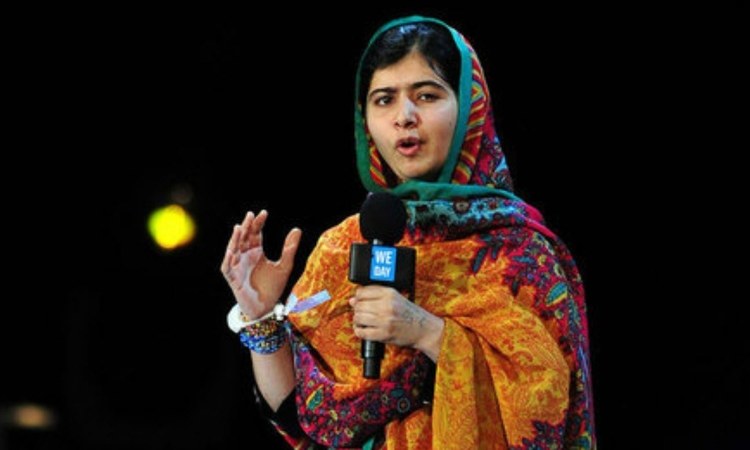 A new photo of Malala Yousafzai recently surfaced on the internet, in which the 20-year-old education rights activist can be seen wearing jeans and heeled boots. This caused a furor among many Pakistanis, and resulted in personal attacks and criticism online.
This is not the first time Malala, who recently started studying at Oxford University, has been at the receiving end of criticism from people in her home country for supposedly defying cultural norms.
The fact that she is now being lambasted for wearing a Western dress and being unaccompanied by her father should come as no surprise.
Muslim women in Pakistan are perceived by many to be the guardians of culture and honour, without actually being given a choice in the matter.
Their bodies are continuously associated with controversy and shame, as a result of which successful women like Malala are made to carry the weight of the reputation of not only religious values, but also of Pakistan, on their shoulders.
The concept of culture in Pakistan is continuously conflated with a monolithic perception of religion and nation, and a Pakistani woman’s free will to decide what to wear is often demeaned as a result.
The obsession of many Pakistanis to police women and the way they dress stems from their perception of women’s bodies as ‘private’. This is why violence against women is seen as a matter worth concealing in Pakistan.
Women themselves are not even supposed to leave the confines of their home. Overreaching these bounds can always lead to harmful, but justified, repercussions in the eyes of many Pakistanis.
Malala, however, has consistently been seeing as defying such cultural norms, while also challenging the premise of a nationhood that relies on a woman’s honour, thereby breaking out of the notions of chaadar and chaar dewari that so many men in Pakistan hold onto for dear life.
Zia ul-Haq’s policies that served to subjugate Pakistani women have left a lasting impact much to the detriment of the rights of women in the country. This has led to everyday institutional injustices meted out against women, fueled by not only by religious but also jingoistic identity clashes.
That is why even the violence afflicted on Malala five years ago is ignored, as violence against women is seen as something that resides in the private domain of our lives, at the expense of our lives and sanity.
Malala has risen above all this, which gives the men of Pakistan a lot of cause for insecurity. Hence, be it unsolicited advice, widespread criticism, moral and body policing, or even assault, women like Malala are always ‘asking for it’ according to such men.
This goes to show how the Pakistani state has actively encouraged the regulation and surveillance of women’s bodies, be it through the laws imposed through the Hudood Ordinance that have still not been rectified fully to this day, or the dress codes that are now being imposed in universities across Pakistan.
Furthermore, shalwar kameez has grown to become a symbol of a religious form of nationalism. Somehow, it has become a visible marker of a Pakistani Muslim’s identity, a choice emblematic of traditions and honour.
Views echoing such sentiments fail to take into account the malleable nature of culture, and end up promoting cultural homogeneity over diversity. Shalwar kameez was never a quintessentially Muslim dress, but rather its veneration by Pakistani men represents state control over women’s bodies at the expense of their agency.
In fact, the criticism of jeans is not against a kind of fabric; her critics think that her individualistic choices come at the expense of her responsibility as the custodian of the country’s honour.
Thereby, she is walking over the fragile reputation of her countrymen, which rests on Pakistani women maintaining an air of conservatism, as per societal norms, while representing the country abroad.
It is very clear that such narratives of nationhood exist at the expense of the bodily autonomy and mobility of Pakistani women, thereby leading to the politicisation of female bodies.
Pakistanis are prone to using women as easy political targets to vent cultural anxiety, be it towards Mahira Khan smoking or Malala wearing jeans outside of Pakistan. We thrive on not the display, but the decimation of a woman, for the sake of a spectacle.
In conclusion, the autonomy of Pakistani women is perceived to be a threat to the religious and national integrity of Pakistanis for many reasons. This is why Pakistani women’s bodies happen to be where patriarchy is at control the most: at home.
This also holds true in light of the visceral responses often levelled at Malala and her personal choices. Her independence, according to many Pakistanis, comes at the expense of the country’s reputation that rests on many things, including the need to conceal and exercise control over female bodies.
Such reactions speak of the larger cultural anxieties among Pakistanis that lead to violence against women all over the country. Nevertheless, Malala continues to stand tall, above and beyond the country’s patriarchal mindset, wherever she goes.