Let’s be clear: Muslims are neither good nor bad. We’re just human 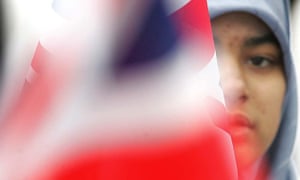 When I was 13 my school, a Muslim faith school, was advised by the police to close for three days after 9/11 because they feared the students would be at risk and that the school building might be attacked. The sharp increase in hate crimes and attacks in particular on visibly Muslim girls and women indicated that this was a very real risk. But as a child it was very difficult to understand why people would associate a group of schoolchildren with these far-removed global events.


Read more
Growing up I was painfully shy and keen to be seen as good. But all my years being a “good” kid seemed to conflict with the prevailing messages that Muslims were deviant and worthy of suspicion; and that Muslim women in particular lacked agency. How I saw myself was at odds with how I was “seen” by others. The past 16 years have involved a lot of questioning and reflecting, both in terms of what it means to be “good”, but also on the various racist myths about Muslims.
The main difficulty is that Islamophobia is so poorly understood. Instead of focusing on the harm experienced by British Muslims, Islamophobia is commonly dismissed by arguing that you can’t be racist against a set of ideas. Obviously there is space to criticise beliefs, and indeed much of this debate takes place between and within Muslim communities. But that is quite distinct from the characterisation of Muslims that denies people the opportunity to self-determine their own identities. It contradicts the very premise of the right to freedom from discrimination – that people should be judged on their individual attributes rather than based on the category to which they are perceived to belong.

Another difficulty is that the so-called “Muslim community” is positioned as homogeneous, outside of, and opposed to Britishness. Twenty years after the Runnymede Trust published groundbreaking research on Islamophobia in Britain, a new report seeks to further the debate by clearly identifying it, not as an abstract issue of culture, but for what it is: anti-Muslim racism. We do draw attention to the denial of dignity, rights and liberties across a range of political, economic, social and cultural institutions. The report examines and maps the impact of Islamophobia on individuals and communities across a range of issues, including employment, health, the Prevent strategy, hate crime and integration. It recentres the focus on individual people and sets out 10 specific recommendations on what needs to be done by government, media, civil society, local authorities – and, indeed, all people – to tackle Islamophobia.
But we also seek to emphasise the fact that this is a debate about people.
The drip-drip demonising of Muslim communities seeps into the everyday experiences of individuals. It manifests itself when they apply for jobs and their CV isn’t considered because of the assumption that they won’t “fit in”; when they visit a doctor and the health professional makes assumptions about their lifestyle and their “conservative” family; when no one will sit next to them on the tube or they are verbally or physically assaulted for looking Muslim. It’s there when a university student worries about being perceived as a terrorist if she badly phrases something in a discussion on Middle Eastern politics.
ll Muslims can recount examples of when Islamophobia has impacted them or someone they know. One incident that continues to disturb me concerns a former pupil, who at the time was not yet 12. On her way to school a man slapped her across the face while hurling Islamophobic abuse. A carriage full of adults watched on. It is difficult for an 11-year-old to process why that happened to her. But understanding that Islamophobia is a form of racism can equip her to cope in the face of prejudice and discrimination.
We should not attribute collective responsibility for crimes on the basis of shared group identity. But we should also stop trying to prove the worth of Muslim individuals by showing how fast they run, how well they bake or how much they give to charity. British Muslims are not exceptional in vice or virtue. We’re just human.
Link