On Insulting Islam: Does the Quran Ask Muslims to Respond with Patience or Violence? 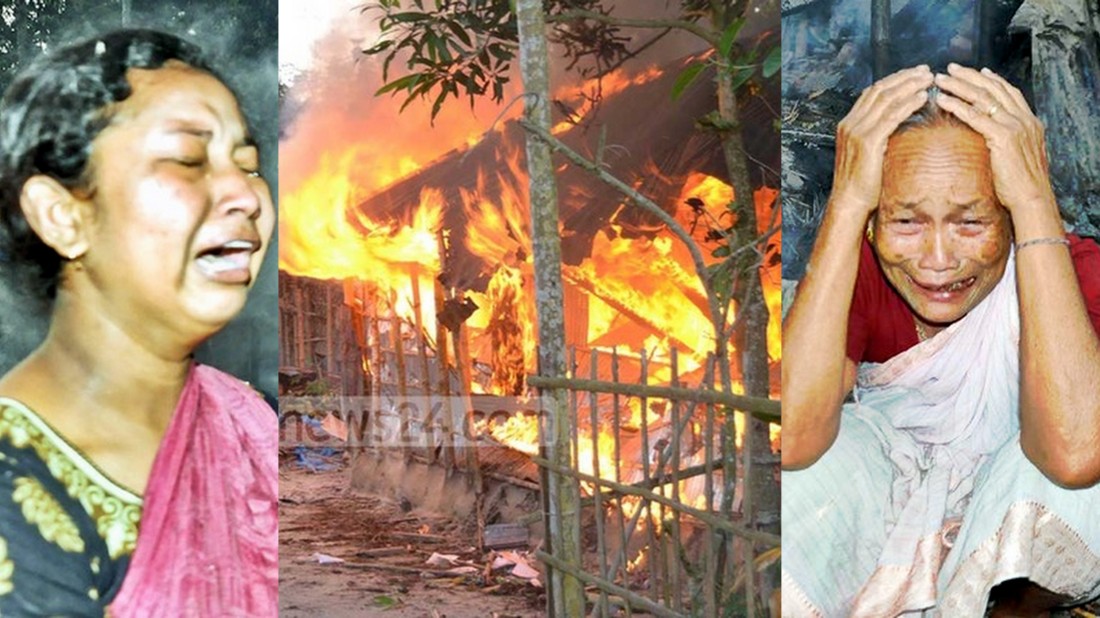 Last Friday at least 30 Hindu homes were burned to the ground by thousands of enraged Muslim protesters after a local Hindu named Titu Chandra made a ‘blasphemous Facebook post’ insulting Islam and the Prophet (ﷺ) in Rangpur, Bangladesh. After initially seeing the post, hundreds of Muslim locals began protesting and gave the authorities an ultimatum to arrest Chandra within twenty four hours. Since the police failed to do so, the protesters were joined by around 8,000 Muslims from surrounding villages and began torching homes in Chandra’s village named Thakubari, a predominantly Hindu neighbourhood. The resultant fires and destruction has left dozens of Hindu families totally homeless and penniless.


Similar atrocities have occurred in the past in other parts of the country. For instance, in November last year, a Muslim mob armed with locally-made weapons demolished at least 10 temples to the ground and vandalised hundreds of houses of the Hindu community in Brahmanbaria‘s Nasirnagar upazila, similarly in response to a Facebook post which allegedly insulted Islam.
Aside from the absurdity of attacking a whole community for the purported actions of single individuals within that community, it is important to note that these incidents are also utterly absurd and unacceptable from an Islamic point of view. Even if the miscreants had not opted for collective punishment and had simply gone after the specific individuals who had ‘insulted Islam’, that would also be condemnable since the Quran categorically prohibits violence in response to insults. For Muslims who are unsure about how to respond to insults about Islam or are even the slightest bit doubtful as to the unacceptability of the miscreants’ actions, I quote only two Quranic verses from the plethora of Islamic sources which preach patience and forgiveness in the face of insult and slander.
In chapter 73 (Al Muzammil – The Wrapped Up), verse 10, in relation to those who insult or mock the Prophet (ﷺ) or Islam, the Quran instructs to ‘be patient over what they say and keep away from them in a graceful manner.’ Some may argue that the injunction of this verse is repealed by verses of jihad which were revealed later on. However, in Maariful Quran, one of the most comprehensive and authoritative Quran commentaries of all time, Pakistani Islamic scholar Mufti Muhammad Shafi argues that a careful analysis indicates that the injunction is not repealed. The above verse enjoins patience and steadfastness in the face of hurtful things the enemies say and cutting ties with them courteously. This is not in conflict with verses that deal with reproof, punishment and armed struggle that were revealed subsequently since the former is a verse of general application (which is applicable under normal circumstances), whereas the latter verses on jihad and armed struggle are of specific application (to be followed during times of war). He makes clear that Islamic jihad and armed struggle is not a matter of taking revenge or expression of anger, which would be totally in conflict with patience, fortitude and courteous severance which is generally required of Muslims. He further argues that in cases of slander and insult, true Muslims do not even entertain the thought of revenge.
In Chapter 3 (Al-i-Imraan – The Family of Imraan), verse 186, the Quran states ‘You will absolutely hear hurtful words from those who were given the book way before you and people who commit adultery and blasphemy with Allah. If you can be patient and you can maintain your consciousness of Allah then that is the most noble of deeds – the highest of accomplishments that you can accomplish’. This verse was revealed in the context of a specific incident. Abu Bakr had angrily slapped a Jew who had snidely remarked that ‘Allah is poor and we are rich’. The Jew then complained to the Prophet (ﷺ) and thereafter this verse was revealed and again instructs Muslims to practice to be patient when faced with situations of insult and mockery. Mufti Shafi comments that these situations are nothing but a trial for Muslims. The best course for them is to observe restraint and remain calm and composed.
Thus from the study of the above two verses which deal with cases of ‘insulting Islam’ or ‘hurting religious sentiments’, it becomes clear just how unacceptable both the Rangpur and Brahmanbaria incidents are. By trying to use Islam as a cloak to legitimise their senseless violence, these miscreants end up insulting the religion they claim to follow a thousand times more than any single anti-Islam Facebook post by a non-Muslim ever could. Interestingly, in both cases the victims complained of how all their houses were looted prior to being burned by the perpetrators. It is unsurprising that in their collective fit of rage they conveniently had the composure to ransack the Hindu homes and pocket the valuables before setting them on fire, possibly showing ulterior motives as in the Brahmanbaria attacks.
We can no longer remain passive in the face of attacks against our minorities, that too in the name of Islam. We need to unite and eradicate the fanatics from within our own communities and expose the fallacy of their ways to show they are not serving the interests of anyone but themselves.
link
https://taqbirhuda.wordpress.com/2017/11/13/on-insulting-islam-does-the-quran-ask-muslims-to-respond-with-patience-or-violence/
Posted by Zafar Khan at 09:00