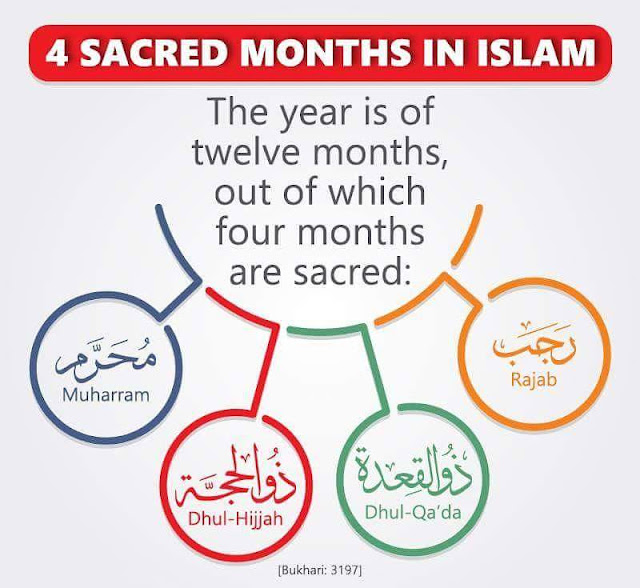 Narrated Abu Bakr: The Prophet ﷺ said: “(The division of time has turned to its original form which was current when Allah created the Heavens and the Earths. The year is of twelve months, out of which four months are sacred: Three are in succession Dhul-Qa’da, Dhul-Hijja and Muharram, and (the fourth is) Rajab of (the tribe of) Mudar which comes between Jumadi-ath-Thaniyah and Sha’ban.” - Sahih Al-Bukhari, Book of beginning of creation, Hadith: 3197

Many Muslims are unaware that there are four sacred months in the Islamic Calendar. Even during the days of Jahilliyah, the idol worshippers of Arabia knew how to respect in these months. There used to generally be no fighting and most places were peaceful.

During these sacred months, Muslims are supposed to spend every possible opportunity to please his creator and avoid from harming anyone physically, verbally or mentally.


O you who believe! Violate not the sanctity of the symbols of Allah, nor of the sacred month. - Surah Al-Maida(5), Verse 2

There are many other glory hunters who may not be a part of any terrorist organization but think of themseleves as holier than others and are harming others every other day. This post is directed mainly towards these people to remind them that they are violating the sanctity of the sacred months that Allah and his Prophet ﷺ talked about on many occassions.
Posted by Zafar Khan at 17:33