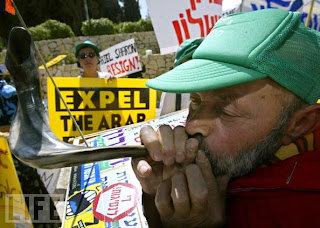 The bigger and longer-term question relates not to the existence, or even the viability of a Palestinian state – which should be a given. The demographics, economics and politics all point the same way. It relates to the future, and long-term survival, of Israel. In short, will Israel, as the Jewish state, still be around to celebrate its centenary in 2048?

Let me make it absolutely clear: the question is not whether Israel should continue to exist. That is beyond doubt. It is a legally constituted state with full UN recognition. It is a stable, albeit fractious, democracy and has survived more than 60 years in a distinctly hostile neighbourhood. It has created a thriving economy, with intensive agriculture and advanced industry, from almost nothing. It has a rich cultural life. It is not alone in having borders that are not finally demarcated and are regarded by some as illegal. The fact that it has enemies who withhold recognition does not negate its legitimacy.

No, the question is not whether Israel should survive, but whether it can and will survive. And here there must be room at the very least for doubt. A string of recent developments contains hints that the state of Israel, as currently constituted, may not be a permanent feature of the international scene.

One is the new porousness of its borders. Despite massive spending on security and recent, controversial, efforts to erect physical barriers along what Israel defines as its border with the Palestinian Authority, its other frontiers have become, or threaten to become, porous. On several weekends in May and June, Palestinians in Syria breached the border with Israel. They did not use overwhelming force. Numbers were enough, against Israeli troops – rightly – reluctant to mow down dozens of young people.

The incursions appeared to be encouraged, if not actually incited, by the Syrian authorities seeking a diversion from their own difficulties. They have since ceased; but the threat remains, and could soon escalate were the situation in Syria to deteriorate. If, in the worst case, Syria descended into civil war, chaos could present an even greater danger to Israel because there would be no one in Damascus with the authority to call the crowds of frustrated young Palestinians back.

Something similar, perhaps even less tractable, applies in the south, on Israel's border with Egypt. Sinai is a vast territory and hard to patrol. Security on the Egyptian side has already deteriorated as a by-product of the fall of the Mubarak regime, and there have been attacks on Israeli convoys in the Negev. If unrest in Syria and Egypt were to extend to Jordan and the Palestinian Authority, the consequences for Israel's security could be even worse.

Add to these growing security problems the demographics – very young and fast-increasing populations in the countries all around – and it is clear that present trends will not easily be reversed. It is just about possible to imagine Israel resorting to the sort of impenetrable fortifications that extend along stretches of the US frontier with Mexico, but the investment would be huge, the message one of isolation, and the effect on daily life in Israel almost entirely negative.

A second reason why Israelis might be justified in having qualms about their future relates to the political aftermath of the Arab Spring. For a long time the fear was that any change in Arab countries would bring Islamist regimes to power, with fiercely anti-Israel agendas. That still cannot be ruled out. But what has happened so far could have more insidious consequences for Israel. Not only is the Jewish state losing its kudos as the sole democracy in the region, but those Arab leaders who actively supported peace have lost, or are losing, power, and the US is giving up on intervention.

One hope was that the emergence of more democratic regimes around Israel might foster a climate of normalisation and mutual respect. That may yet happen. But another effect is that leaders will have to be more responsive to the wishes of their people. As can already be discerned with Egypt, this may not bode well for stability in Arab-Israel relations. With the Arab Spring also bolstering the self-confidence of the Palestinians – a factor in Mr Abbas's decision to take his case to the UN last week – the political balance in the region is shifting.

A third reason for doubt about Israel's future lies within the Jewish state itself. With the early pioneering spirit fading, and even the Holocaust – dare one hazard – less of a unifying force, Israel is not the same country it was 60, 30, even 10 years ago. And demography means that it will continue to change, with the Arab, Orthodox Jewish and second-generation Russian populations increasing much faster than other groups. The Israel of the next 30 years is likely to be more divided, less productive, more inward-looking and more hawkish than it is today – but without the financial means and unquestioning sense of duty that inspired young people to defend their homeland by force of arms.

Recent mass protests against inequality and the cost of middle-class living also suggest that the social solidarity that has prevailed hitherto could break down. In such circumstances, it must be asked how much longer Israel can maintain the unity it has always presented against what it terms the "existential threat".

An Israel whose borders are leaky, which is surrounded by states that are at once chaotic and assertive, and whose citizens are less able or willing than they were to fight, could face real serious questions about its viability. The choice then might be between a fortress state, explicitly protected by nuclear weapons, and a state so weak that association, or federation, with the burgeoning independent Palestine would become plausible: the so-called one-state solution by other means.

In either event, those with other options – the younger, more educated, more cosmopolitan sections of the population – might well seek their future elsewhere, leaving the homeland of their ancestors' dreams a husk of its former self. The emotive call, "Next year in Jerusalem" would be the wistful vestige of a noble ambition overtaken by cruel demographic and geopolitical reality.