So, what do you think of your husband's brutal crackdown, Mrs Assad? 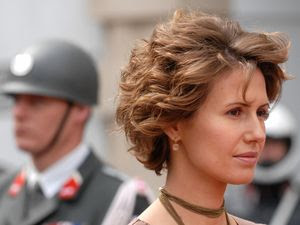 Vogue magazine famously called her a "rose in the desert", while Paris Match proclaimed she was the "element of light in a country full of shadow zones". But when Syria's glamorous First Lady invited a group of aid workers to discuss the security situation with her last month, she appeared to have lost her gloss.

During the meeting, British-born Asma al-Assad – who grew up in Acton and attended a Church of England school in west London – came face to face with aid workers who had witnessed at first hand the brutality of her husband's regime. Yet according to one volunteer who was present, the former investment banker and mother of President Bashar al-Assad's three children appeared utterly unmoved when she heard about the plight of protesters.

"We told her about the killing of protesters," said the man, who asked not to be named for fear of retribution. "We told her about the security forces attacking demonstrators. About them taking wounded people from cars and preventing people from getting to hospital ... There was no reaction. She didn't react at all. It was just like I was telling a normal story, something that happens every day."

Syrians working with aid agencies to try to help the thousands injured as Mr Assad's security forces unleash tanks, guns and airpower to crush a seven-month uprising against his rule had hoped for a lot more. The First Lady's office contacted them and said she wanted to hear about the difficulties they faced in the field. She met the humanitarians in Damascus.

"She asked us about the risks of working under the current conditions," he added. But when she was told about the abuses of power being committed by her husband's notorious secret police, Mrs Assad's blank face left them unimpressed. "She sees everything happening here. Everything is all over the news. It's impossible she doesn't know," said the volunteer. Yet even if Mrs Assad does know about the worst of the violence and the 3,000 civilians human rights groups accuse the regime of killing, many people who have met her question what she could possibly do about it.

"Whatever her own views, she is completely hamstrung," said Chris Doyle, the director of the Council of Arab-British Understanding. "There is no way the regime would allow her any room to voice dissent or leave the country. You can forget it."

Mrs Assad, who achieved a first class degree in computer science from King's College University, was brought up in Britain by her Syrian-born parents, who were close friends of Hafez al-Assad, the former President of Syria. She started dating Bashar al-Assad in her twenties, and they eventually married in 2000, when she moved to Syria for the first time.

According to one prominent Western biographer of the Assad family, Bashar chose Asma against the determined opposition of his sister and mother. "He had lots of beautiful girlfriends before her," said the journalist, who asked not to be named. "He faced opposition when he wanted Asma because she was Sunni and he is Alawite. Here was Bashar al-Assad marrying outside the clan."

She championed several development initiatives, and delivered genuine change by helping to create NGOs in Syria, as well as highlighting the plight of disabled children and laying the groundwork for plans to rehabilitate dozens of Syria's ramshackle museums.

For some, she is the modern, made-up face of a former pariah state; to others, an aloof, 21st-century Marie Antoinette. Either way, nothing perhaps crystallised the fate of Syria's First Lady better than the disastrously-timed interview run by Vogue magazine in its March issue this year.

Amid obsequious descriptions of Chanel jewellery and her matey banter with Brad Pitt during the Hollywood star's 2009 visit to Syria, the article described how the Assad household was run on "wildly democratic principles". According to Mrs Assad: "we all vote on what we want, and where."

Naturally, many outraged Syrians were left asking why the Assads could not extend them the same courtesy.