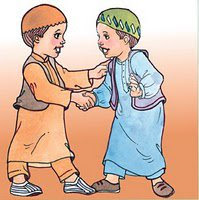 Ibn `Umar (May Allah be pleased with him) reported: The Messenger of Allah (SAW) said:

“A Muslim is a brother of (another) Muslim, he neither wrongs him nor does hand him over to one who does him wrong. If anyone fulfils his brother’s needs, Allah will fulfil his needs; if one relieves a Muslim of his troubles, Allah will relieve his troubles on the Day of Resurrection”

[Narrated in Bukhari and Muslim]
Posted by Zafar Khan at 09:28