Muslim leader: find wives in Britain not Pakistan and India 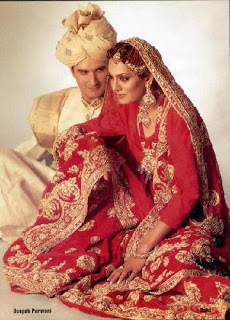 Muslim men have been told to marry women born in Scotland rather than import wives from Pakistan and India.

Shaykh Amer Jamil, a Glasgow-born Islamic scholar, warned that Asian women who have grown up in Scotland are being left on the shelf in favour of wives from outside the country.

Parents often prefer their sons to have arranged marriages with women who grew up in the Indian sub-continent, as they are seen as better partners. But this means there are increasing numbers of British women unable to find a husband.

Islamic dating events have been set up to try and address the situation, but the balance is so heavily weighted towards women that few marriages result from these events.

Shaykh Jamil, an Islamic scholar who set up a family counselling service called Unity Family Services, said: “I would say the situation is at a critical level. There are many well-educated women up and down the country who want to get married but are not finding the right match. There is an acute shortage of suitable male options and the ones who are available are getting married from back home.

“Consequently, this leads to many women reluctantly having to bring someone over from south Asia and that can lead to problems. The men coming over have a different mentality and are not used to seeing a female working or having a life outside of the home. It makes sense to marry from within the UK as both partners will speak English and will be familiar with British culture. This will also make raising children much easier.”

There are also community cohesion implications to the trend, as women come over from Pakistan who cannot speak English and are unused to the culture.

Arranged marriages are often facilitated by an informal matchmaking network of women called Aunty Gees. Shaaista Yousaf is one of these women and she has been arranging marriages for more than a decade. Currently, she knows 30 eligible males and 80 females.

She explained: “There are mothers who insist their daughters only marry within a specific caste. They don’t like them getting married outside of the biraderi [extended clan affiliation]. Such an issue automatically narrows their choice.

“There are also girls who are not prepared to stay with the in-laws. They want their own home, their own privacy. Girls brought over from Pakistan know how to live with the extended families and the family politics that come as a result of that. Girls from here are not used to that.”

Naseem Khan ran Muslim marriage events in Glasgow for five years. She said that attitudes are changing amongst the younger generation, who want different things from a relationship.

She said: “Our mothers came here and brought with them some cultural baggage that led them to get their daughters married within the family, within the same caste or someone who they had given their word to back in Pakistan. Such attitudes are not prevalent amongst me or my friends. We are more flexible.”

Amina is a 38-year-old single woman from Glasgow. She is currently unemployed, but worked in accounts before retraining with a degree in music. Amina (not her real name) then worked in London’s music industry for five years before returning to Glasgow.

“People ask questions if you don’t have a partner by my age,” she says. “They realise I’ve had a career and done other things, rather than brought up children.

“Parents want men to marry from back home – it is one of the biggest problems in the Asian community. Mothers think the girls [here] are not good enough; they don’t have the attributes of girls back home, who will be better wives. They think girls here are too independent.”