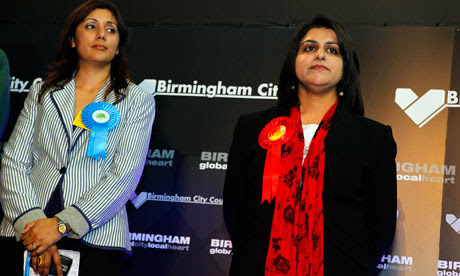 As election votes around the country continue to be counted this morning, the historic announcement came that the country has voted for Britain's first female Muslim MPs.

A record 22 Asian women stood in this election for all three main parties. Until now no Asian women have ever been elected as MPs. The first male Asian MP, the Indian Dadabhai Naoroji, was elected in 1892 for Finsbury in central London. Mohammad Sarwar became the UK's first Muslim MP after winning Glasgow Central in 1997. Sayeeda Warsi became the first Muslim woman to sit on the front bench for the Conservatives in 2007 – as a baroness rather than as an MP.

A former Oxford graduate and barrister, Mahmood is the daughter of the Birmingham Labour party's chairman and stood against another female Asian candidate for the Conservatives, Nusrat Ghani. Her selection caused consternation among local activists but was fiercely backed by party chiefs.

Speaking last month, Mahmood stressed that Muslim women were interested in politics and her candidacy showed that a role in the Commons was open to all ethnic minorities.

"The image of the voiceless Muslim woman who cannot leave the house is just not true: they are interested in politics. Parliament is for the people – all of the people – and the ethnic minority population should claim it."

Mahmood, a "born and bred Brummie" who replaces Clare Short, who stood down as MP, said she had also faced fears that she would not be accepted by the Asian community.

"When I was first selected a lot of people said to me that Asian men or Muslim men won't talk to you or engage with you but I found for a lot of people it's a breath of fresh air," she told the BBC.

Mahmood said she was "humbled and honoured" by her win. "This is a constituency with significant challenges but it is incredibly diverse and vibrant. I pledge to be a hard-working MP, working every day to fulfil the faith people have in me. I will fight for Ladywood as a passionate and committed Labour MP," she said.

Qureshi, 46, a Pakistani-born criminal barrister, moved to the UK when she was nine. She advised the former London mayor Ken Livingstone on human rights and was chosen from an open shortlist of six candidates, having previously stood for the London Brent East constituency in 2005. She has also previously headed the criminal legal section of the UN mission in Kosovo.

"It is a truly humbling experience and I promise to work very hard for the constituents."

According to her website, Qureshi said she was "passionate about public service and firm in her commitment to work for the people of Bolton South East".

So far, all six Muslim MPs voted into the UK parliament – including Mahmood and Qureshi – have represented Labour.