In conversation with Muna AbuSulayman 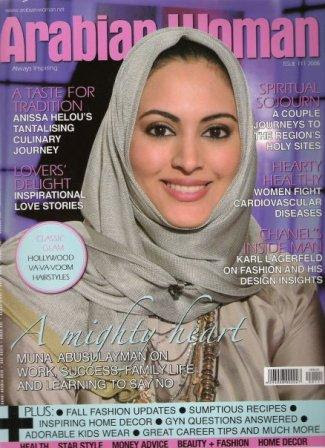 For most people, Muna AbuSulayman is a bit of an enigma. As one of the leading media personalities in the Kingdom, she is a founding co-host of one of the most popular talk shows on MBC - “Kalam Nawaem” - and the first woman in Saudi Arabia to be appointed by the United Nations Development Program as a Goodwill Ambassador in 2005. She also serves as Secretary General and Executive Director of the Alwaleed Bin Talal Foundation, the philanthropic arm of Prince Alwaleed Bin Talal’s Kingdom Holding Company. In this capacity, she is responsible for the foundation’s global philanthropic activities, including disaster relief to promoting dialog between Islamic countries and the West. Since 1997, she has served as a lecturer on American literature at King Saud University in Saudi Arabia.
In a recent interview, she spoke to Saudi Gazette at length about her life and the importance of education for women.

A fresh perspective on life
Owing to the remarkable course her life has taken so far, Muna AbuSulayman has a refreshing perspective on life. “I want girls to see that there is almost no limitation to where they can go; the most important thing they can do is to work to be content, happy, married and to have children,” she said. “Look at your life and learn from your own mistakes because nobody will tell you what they are.”
She also highlighted the importance of family support. “It was only because of my parents’ encouragement that I was able to achieve anything. My father believed that I could even become something like a medical doctor if I set my mind to it,” she remarked. “In fact, I would still like to become a doctor - though an academic one - but I don’t have the time. I keep thinking that when I turn 45, maybe I’ll do a PhD and then spend my time reading about things I am personally interested in and not just for work.”
“I don’t believe education or passion stops at a certain age. I can be 90 when I get my PhD; I could go back to school at any time,” she added. “But what am I going to do with it then? Would it be important? Or will I be taking the courses for my own knowledge? Will I teach at 90? There’s no limit to timing as long as you have the passion of course and good health. If you don’t have good health, you don’t have the energy. And people don’t work on their health.”
AbuSulayman is passionate about keeping fit and healthy. She believes that a number of social ills are borne of not being healthy enough. “I did this fasting thing a year ago, which was about helping to focus energy. I started learning about yoga and why it focuses on meditation so much and what it means. The concept is very similar to Islam actually. For example, if you look at prayer, there are certain times for it. Fajr is only valid for a certain period of time. Moreover, Eastern studies tell us that the ground absorbs negative energy from the body. Praying five times a day means that the body releases its negative energy five times a day,” she explained. She added that fasting similarly detoxifies the body naturally and exists in a number of cultures for this very reason.

Education in the Kingdom
AbuSulayman is also passionate about education. “Education in the Kingdom is a very complex problem. The solution to good education is great teachers, and to have great teachers, we need competitive exams and high rewards like in Singapore and Iceland where they have great education because their teachers are paid very well.
It is the most important job in the world. When officials talk about rote-learning or adopting the American diploma I cringe because that is not the solution. Students succeed because of great teachers not great curricula, not good school, not American diploma or English diploma,” she said.
“A good teacher is one with passion, and one who is not overwhelmed with other tasks. We need to look at the fact that some teachers need to work two jobs in order to afford a decent living; we have a lot of rural areas where we cannot have teachers and sending teachers there is not right. We need to look at the Teachers College and make sure that the entrance exam allows only the best in certain subjects to actually teach in those subjects. Then when these teachers graduate they need to be paid well.”
“Why don’t we have scientific journals translated into Arabic?” she asked. “I think it would be the second most important step to allow the Arab world to change from being passive society into a knowledgeable society. If we don’t allow people to be able to learn in their own language, we will never become a first world country.”
Questioning the validity of co-educational systems, she said: “I don’t have a problem with co-education. But the issue is who is doing the decision making? If women have to refer to men for decision making and how to allocate resources, then that is not fair.”

Personal life
Muna AbuSulayman is a single mother of two. She has a unique parenting style, with a no-TV rule at home. “I have two daughters; a 16-year-old and a nine year old. I didn’t like them watching things that I don’t know about and they weren’t reading as much as I wanted them to. They were also bored most, if not all, the time. But since then (the rule) they aren’t bored. They exercise, learn ballet and read now. And on Fridays, for example, if they have nothing to do, I let them watch DVDs. I want them to be able to utilize their time,” she said.
“I overworked myself five years ago and it drained me of a lot of energy. I used to want to show people that just because I’m divorced doesn’t mean I need support, but I have always turned to family for support.”
Slowing down has been essential for her contentment in life. “Now I check my email twice a day rather than having it on all day. I left ‘Kalam Nawaim’ when it was getting too much. Is it worth the recognition and me traveling a weekend every month and leaving my kids? The foundation and my daughters needed me so I made the decision.”
For now, she is traveling around the world and participating in public forums and debates. As a recognized style icon for women, she told Saudi Gazette that her own clothing and fashion accessories line will be launched in stores all over the world next month, as well as on the Dia Diwan website (www.dia-boutique.com). – SG
source
Posted by Zafar Khan at 10:11