Urdu did not have a word for "rape". 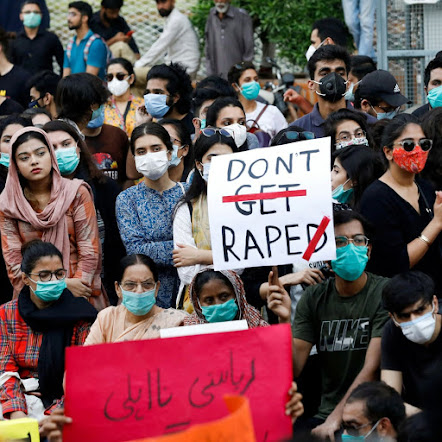 When partition happened, men of all three religions took it upon themselves to humiliate the other group by ensuring that their women carried the sperm of the other's religion. Mass rapes took place. Carried out by men of all three religions against women of all three religions. In case a woman got raped, it was likely that she'd be killed by her own male family members in order to protect their honour. The situation got so bad that the only way women could think of saving themselves from such a fate was to end their lives themselves. Suicides became common. Women would often jump in wells to kill themselves until wells started filling up with dead bodies. At one point women had to actively search for wells with some space left to die in.

August 1947, two states celebrated indepedance. Urdu did not have a word for "rape".
When Bengal asked for its independance, it did so because the East Pakistanis felt deprived of its right. The Bengali man realized he would never be allow to run his own country or be a part of it. The Pakistani man could not fathom how the Bengali man could place his interest over national sovereignity. War ensued. Thousands died as an army turned against its own people. Thousands were raped. In one of the most horrifying cases on war crimes in modern human history, the Pakistani army raped thousands on Bengali women in an effort to insert their sperm in the Bengali lineage as payback for the Bengali man to prioritize his interests over national cohesion. The number of rapes was so high that rehabilitation of these women became one of the top most priorities of the newly born Bangladeshi state. The government promised economic reward to men who would marry these victims of wartime rape. In a war torn, newly independant state, men jumped at the opportunity. They married these women, claimed their economic reward and left them soon after. Further stigmatizing these women, until they started being conflated with sex workers.
Pakistan lost a war. Committed one of the biggest incidents of war crimes. Lost half the country. Thousands of women had their lives turned upside down.
Urdu did not have a word for "rape".
When Zia-ul-Haq came into power, he put into practice the Hudood Ordinance. One of those laws contained the Islamic judgement on Zina.
The Islamic judgement on Zina states that if an individual accuses two people of adultery, he is required to bring forth at least four eye witnesses as evidence. In case of failure, the individual would be charged with defamation. The laws of Zina were meant to ensure that public acts of sex did not become common, and any act taking place behind closed doors did not become a matter of public debate, and be dealt with privately.
Men raped women prior to the imposition of the Hudood law. Men raped women after the imposition of the Hudood law.

Women tended to remain quiet after being raped in order to protect familial honour. So they did.
But rapes can get women pregnant, and now when a woman carried a child of rape in her womb, she had to go to the police station in order to report her rape so that she not be accused of adultery.
The law then asked her the question that was supposed to protect her against defamation: bring forth four witnesses of rape. Because you see, urdu did not have a word for rape. Despite a national history so closely tied to it, it did not have the concept of rape. Female anguish was not spoken of in our national language. It was not heard. It was only inflicted.
As far as the imposition of Hudood Ordinance in Pakistan was concerned zina was adultery, zina was rape. And if zina had taken place, then the person claiming it to have taken place, in this case a pregnant victim who is left with no option but to report, had to bring forth four eye witnesses of her rape. How do you bring forth four witnesses in the case or rape, when the entire logic to bring forth four witnesses was to ensure that the private does not become public.
The catch: the woman has reported she was raped. Rape is zina in this reality. There is a life in her womb as testament to it. But there is no man.
The woman has "confessed" but there aren't four eye witnesses to support her against the man she accuses.

The raped woman is sent to jail for Zina under the Hudood Ordinance.
Sometimes no man was sent to jail for being the counterpart. In case that the rapist was influential, it was arranged that some other man be accused for it instead. This man could be anyone. Someone who was in love with the victim. Someone who friends with her. Someone who was cordial to her. Someone who took pity on her. It doesn't matter. As long as the two could be placed in the same vicinity by the locals. The man was then accused. Taken into custody. Tortured and forced a false confession out of.
In the 1980s, as Pakistan celebrated itself as the nation that brought a super power to its knees, women were being sentenced for their own rape. And men were being dissuaded from even being seen close to them.
Because Urdu did not have a word for "rape".
That is when women took to streets and demanded this be put an end to. Remember the iconic image of women burning their dupattas? It was in one of the many protests women conducted against Zia's multiple misogynistic laws to protect the "Islamic" culture.
Women marched.
After decades of being raped. Being killed by brothers and fathers after being raped. Killing themselves to prevent from being raped. Being raped in a war by their own army. Being exploited after being raped by their own men. Being raped and being sent to jail for it, women finally forced the language to create a word for that experience.
In the 1980s, we finally had a word in the vocabulary that described the experience of women in the Islamic Republic of Pakistan: Zina-bil-Jabr.
It was still just a word. Not the law. Introducing Zina bil Jabr in the vocabulary meant that in the case of rape a woman can accuse her rapist under Zina bil Jabr instead of Zina. And her accusation not being taken as a confession of adultery. She still had to produce four eye witnesses of rape in order for there to be a conviction. Again, impossible.
The introduction of the concept of Zina bil Jabr meant that the state will not punish the woman for being raped. It did not mean that the state would protect her against being raped.
Men knew that the chances of being convicted in the case of rape were slim to none. Thus, there was nothing preventing them from raping women like they used to by the state.
What followed was a feminist struggle of years. Women repeatedly argued that the four-witnesses-for-rape charge is an impossible condition for any victim to fulfil.
To which, men responded that it is Islamic law. Men argued that Islam has given women rights already. Demanding there to be an overturn in the law is the result of a westernized mind being antagonistic towards Islamic traditions of the country.
1) It is not an Islamic Law.
2) Pakistan has a history of sexual violence against the women
3) We have heard it. We still hear it. We will hear it for eternity.
After another two and a half decades of struggle, in 2006, there was finally a act passed in the assembly: The Women Protection Act of 2006 that removed the four eye witness condition from a rape charge.
The act stated that in case of a rape charge, forensic evidence will be considered adequate evidence for a man to be charged with rape.
We got a word for our experience four decades after they said we were independant.
We got a shot at justice 59 years after they said we were independant.
Islamic Republic of Pakistan, this.
Men raped women when they got this country.
Men raped women when they lost this country.
Men raped women when they went on a Holy War.
And men never had a word for what they did to us.
Women were raped.
Women were killed for being raped.
Women killed themselves to prevent themselves from being raped.
Women were raped by the men they paid to protect them.
Women were married as a stepping stone and discarded.
Women were raped and were sent to jail for it.
Women were raped and were made to stay quiet about it because they couldn't possibly prove it in courts.
Women marched.
Women marched against a dictators.
Women fought for a word to describe decades worth of trauma. The trauma of existence in this hellhole.
Women fought against the state. The men with guns.
Women fought against decades of stifling tradition.
Women fought against the men who have the Holy Book on their chest and darkness in their hearts.
Women fought against every man who ridiculed her. Who raised his finger on her character. Who accused her of being a pawn of the enemy.
Women fought against the men who raped her.
Women fought for the law that gives her a shot at justice.