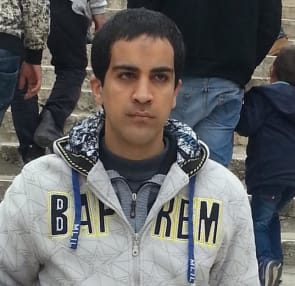 A little before 6 A.M., Warda Abu Hadid, Eyad’s caregiver, also set out from her home in the Jabal Mukkaber neighborhood, headed for the Elwyn center. At about 6:10, Abu Hadid, 47, passed by the Border Policemen who were manning the security post at Lions Gate and entered the Old City. She had not walked much more than 100 meters before she heard shouts behind her: “Terrorist! Terrorist!” Immediately afterward she heard three shots. She rushed to the garbage room nearby, taking shelter behind the iron closet on its right side. Just then her ward, Hallaq, ran into the room in a panic and collapsed on the floor. A sanitation worker was sitting there, drinking tea.

The garbage room is an open space, not very big, with a few chairs for sanitation workers and a large container that reeked unmercifully this week when we visited the site. On the iron closet is a metal plaque with verses from the Koran, which has been here a long time. There were three bullet holes in the tin wall.

Abu Hadid noticed that Hallaq, lying on the floor, was bleeding, apparently from being shot in the leg by the Border Policemen as he fled. She later told Amer Aruri, of the Israeli human rights organization B’Tselem, that Hallaq lay there for between three and five minutes, wounded, before he was shot and killed.

The whole time she shouted, “He is disabled, he is disabled!” in Hebrew, and Hallaq shouted, “Ana ma’aha!” – Arabic for “I am with her” – as he attempted to cling to his caregiver for protection. It’s not hard to imagine what went through his mind in those last terrified minutes, as three officers ran into the room screaming, “Where is the rifle? Where is the rifle?”

The officers aimed their weapons at Hallaq. They were at point-blank range, standing over him at the entrance to the garbage room. Abu Hadid kept trying to explain that Hallaq didn’t have any sort of gun – he was only holding the surgical face mask that is required these days at the center, and rubber gloves – when one of the officers fired three shots with his M-16 into the center of the young man’s body, killing him instantly.

Suddenly the area was filled with Border Police, among them an officer who aimed her weapon at Abu Hadid’s head, ordering her to stand still while she subjected her to a body search. The caregiver, whose ward had just been killed before her eyes, was utterly distraught. She was then taken to the police position next to Lions Gate, stripped almost naked in a search for the nonexistent firearm, and then interrogated for three hours.

The officers wanted to know about Hallaq and the institution he attended. They then informed Abu Hadid that she would be taken for questioning to the notorious room No. 4 in the police station in the Russian Compound, in downtown Jerusalem. She balked, telling the police that she first had to call her director, which they allowed her to do.