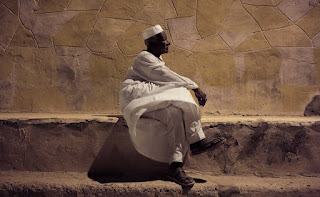 How can we retweet #BlackLivesMatter with one hand while, in many countries in the region, we hold on to Kafala contracts with the other? Or, as British-Sudanese artist Rayan El Nayal phrases it, have the courage to post on Instagram, but not talk to our families about their continued use of the word 3abeed (Arabic for ‘slave,’ used colloquially to refer to black people)?

There’s a valid argument for the irony of our situation, how young Arabs could be ‘virtue signaling’—a far from perfect term itself—to appear woke and progressive on social media, while refusing to face what’s right at home. But there is also a more insidious voice that’s made itself heard, of Arabs trying to claim distance from the whole thing: in the vein of ‘let the US deal with its own problems.’ As if this does not directly affect us, as if Arab anti-blackness, both in the region and its diasporas, are not directly culpable.

“Dear amo, let it be known that the majority of white-Arabs are racist! I know it’s uncomfortable to read this amo. You might not be one of them. But listen! It’s in your homes, your movies, comedy, and your language, even in how your people would refer and regard us as 3abeed or aswad. It was never funny—and now we’re gonna talk about this.” – Remaz Khalaleyal.

From Morocco to Bahrain and every country in between, there’s no shortage of racist epithets normalised into everyday language. Yasmine Ghazzali, 23, a Moroccan graduate student, uses the example of la3b drawa, “which roughly translates to ‘black play’. It’s used when people playing around starts getting rough or hurting each other.”


And prototypically, one line of verse from legendary 10th-century Abbasid poet Al-Mutannabi has made its way into Arab (sub)consciousness as a veritable proverb, used at the drop of a hat. Originally written as part of an attack on Abu al-Misk Kafur, a black Egyptian vizier who did not award Al-Mutannabi the office he desired, the line reads: la tashtary al-3abd illa wal 3asa ma3aho—inn al 3abeed anjas manakeed, which translates into “Never purchase a slave without his stick…slaves are impure from birth.”

Over a millennium later, the use of the literal word for ‘slave’ in reference to blackness is still a part of our vocabulary. And yes, words matter. Language matters. Consider it the Political Correctness Police who ‘can’t take a joke’ or dare to take offence at people being called literal slaves. Because for one, ‘political correctness’ is really not the big bad Western-import wolf that we sometimes like to think it is.

More importantly, however, as should be clear by now, these words don’t exist in a vacuum. And even when they’re not immediately violent, when wielded against black people in the way they so often are, they carry very real threats.

Dani*, an African national in Saudi Arabia (who would rather not specify nationality), tells me the story of standing in line with their mother at a clothing store, when the boy in front of them left the line. “Once we reached the counter, this Saudi woman (the boy’s mother) started yelling at us, saying how disrespectful we are to have cut in line. She kept saying things like ‘wallah ara7alkom anto aslan ma taswoo shyy’ (‘I swear I’ll deport you, you are worth nothing.’)”

“None of the people standing even had the nerve to say something, because deep down, this is what they believe,” Dani continues. “That they are superior. They treat foreigners like they’re parasites. It is off the backs of foreigners that the Gulf has grown so fast, and yet we are still referred as 3abeed like we’re in the middle ages. I’m honestly so tired of the ignorance.”

Dani also tells me how they wish black people they grew up around would have taught anything other than: “don’t reply, you’ll get yourself in trouble,” a more than familiar sentiment in Gulf countries.

Charles*, 20, an African undergraduate student in Qatar who also wanted his nationality unspecified, says he was warned by older black students to watch what he says, and avoid getting on the wrong side of anyone. In his first week in the country, he tells me, two Qatari women called the police on him and two other African friends for walking behind them in a packed mall.

“I guess Karens exist everywhere when you’re black,” he quips. “There’s all the ‘I’ll get you deported’ jokes that people throw around. But you can never be sure as to whether these ‘jokes’ are banter or not, because their words carry power. For real, they know that they can get you deported. Because once it reaches the higher levels, you’re assumed to be guilty from the get-go.”