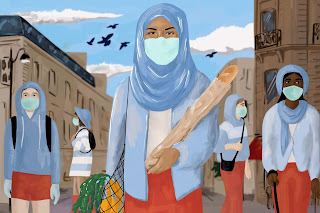 Amid the coronavirus pandemic, France is faced with a paradox: It has just made the wearing of masks compulsory in certain public spaces, but maintained the years-long ban on Muslim full-face veils. This suggests, as the Washington Post recently noted, "if an observant Muslim woman wanted to get on the Paris Metro, she would be required to remove her burqa and replace it with a mask".

The French government made the use of face masks in public mandatory on May 10 in an effort to safely ease the country's strict coronavirus lockdown. More than 50 other countries, from Germany to Uganda, had previously passed similar laws and provisions to stem the spread of the virus and get people back to work.

While in most countries the discussion about compulsory face masks focused on the effectiveness of the measure, in France, where not long ago the government proudly stated that "the Republic lives with its face uncovered", this decision raised questions about the way the state defines French identity and values.

Face coverings started to be discussed in the context of French national identity for the first time more than a decade ago, during Nicolas Sarkozy's presidency.

In October 2008, the High Authority for the Fight against Discrimination and for Equality (HALDE), France's public watchdog group on discrimination, equated the wearing of a burqa to the "submission of women" in a ruling over an administrative decision that denied a woman wearing the garment access to the French-language classes that were required for her to remain in France. As it sided with the public authority that took the controversial decision, the watchdog said: "The burqa carries the meaning of the submission of women which goes beyond its religious scope and could be considered as undermining republican values presiding over the process of integration and organisation of these lessons."

The ruling laid the foundations for the perception that this religious garment is not only fundamentally anti-feminist but also foreign to French culture. It also ignited a debate on "republican values" which quickly transformed into a debate on whether Islam is compatible with the French Republic.

Just a few months after the publication of HALDE's ruling, as the call for the banning of all Muslim face coverings became louder across the country, President Sarkozy himself joined in the debate.

In a State of the Nation address, the president claimed that face coverings worn by some Muslim women were not a "religious problem" but a problem of "liberty and women's dignity" and declared "the burqa is not welcome in France".

Sarkozy's words ignited another major public debate, with one side accusing the president of weaponising feminism and secular values to exclude Muslims from the French identity and the other emphasising the importance of protecting the nation's core liberal values.

While the few women in France who wear full-face veils were never included in the "burqa" debate, several prominent public figures - mostly men - passionately argued that no one would willingly choose to wear such a garment and that anyone wearing it was undoubtedly a victim of male oppression. Failing to realise the irony of denying women agency over their own bodies and outfit choices while trying to "save them" from gendered oppression, these people eventually convinced the country that all face coverings should be banned to protect women's rights and French values.

As a result, in September 2010, the French Senate voted in favour of a bill banning the concealment of the face in public spaces. In March 2011, weeks before the ban came into force, the government issued a new circular about the scope of the ban and offered some cultural justifications for it.

"To conceal the face is to infringe the minimum requirements of life in society," the circular stated. "This also places the persons concerned in a situation of exclusion and inferiority incompatible with the principles of freedom, equality and human dignity affirmed by the French Republic."

The circular, therefore, officially acknowledged a link between the way a person chooses to dress themselves in public and that person's place in French society. To be recognised as a French person, the circular affirmed, one has to show her face in public, as a confirmation of her commitment to the "common values" and "shared destiny" of the country.

This is why the French government's recent decision to make the wearing of face masks mandatory in public places raised questions. The government's move to make face masks compulsory while refusing to reverse the ban on Muslim face veils reaffirmed the conviction many already had that the so-called "burqa" ban has nothing to do with the incompatibility of face coverings with the French way of life and everything to do with the state's reluctance to include visible Muslims into the French national identity.

As millions of French people now participate in public life with covered faces without any issue, it is indeed clear that the French state banned Muslim face veils not to protect the values of the Republic, but to promote an assimilationist understanding of Frenchness that does not tolerate minority cultural expressions.

The coronavirus pandemic exposed the French state's hypocrisy about several other forms of behaviour, too.

For example, back in 2019, following an attack on the Paris police headquarters by a Muslim employee, French Interior Minister Christophe Castaner delivered a controversial list of potential signs of radicalisation to the French Parliament. Alongside innocent cultural expressions, such as wearing a long beard, he suggested that a Muslim person's refusal to kiss someone to greet them, as many French people usually do, could be a sign of radicalisation. Now, however, the state is actively encouraging citizens to refrain from kissing each other in an attempt to stop the spread of the virus. There is, of course, no suggestion that refusing to kiss someone can infringe the requirements of life in society.

The COVID-19 pandemic, and the extreme measures that were taken to fight it, showed that neither the wearing of face veils nor other forms of Muslim cultural and religious expressions, have ever posed a threat to the French way of life. It showed that the motivation behind the "burqa ban" was not to protect republican values but to prevent Muslims from being included in public life. The French state simply used cultural markers that are associated with "being French" in the national psyche to draw the contours of an exclusionary national identity.

Now that COVID-19 demonstrated that one can indeed participate in public life and remain "French" without showing her face or kissing acquaintances, the nation could do well to rethink the way it treats Muslims.