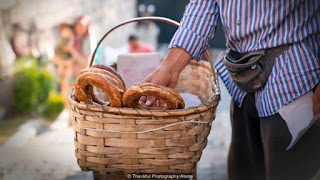 At my local bakery in Göztepe, near Kadıköy on the Asian side of Istanbul, everything is made on the premises in a wood-fired oven tucked away at the back. Any space not taken up by the 1,200 white loaves they produce a day is filled with baguettes, rolls, rye, multigrain and cornbread, as well as cakes, biscuits and pastries. Amidst the constant flurry of customers, I’ll sometimes see the owner give someone a loaf of bread without any money changing hands. At other times a customer will pay for two loaves of bread but only take one.

Is there bread on the hook?

In many Western countries, it has become common in recent years for people to hand over money for an extra cup of coffee or a filling meal when they pay for their own, to be held at the counter for a person in need. In Turkey, this seemingly modern idea of “paying it forward” goes back centuries. It’s called askıda ekmek, and it relates specifically to paying it forward with bread.

Askıda ekmek, which means “bread on a hanger” or “suspended bread”, has its roots in Islam, the dominant religion in the country. It works like this: you go to a bakery and pay for two loaves of bread but only take one. On paying for the bread, you tell the person who takes the money that one of them is askıda ekmek. Your contribution is bagged and hung together with others so when people come in throughout the day and ask, “Askıda ekmek var mi?” (“Is there bread on the hook?”), they can take a loaf for free.

It’s not clear exactly when and how the practice of askıda ekmek started. Although there are similar, more recent traditions in other countries, like the Italian practice of “caffè sospeso” (“suspended coffee”), askıda ekmekis is strongly tied to the local culture and religion. History professor Febe Armanios, who focuses on Christian-Muslim relations in the Middle East and food history at Middlebury College in Vermont, US, explained that askıda ekmekis “a custom rooted in Ottoman times and is tied to the concept of zakat, the Muslim pillar of faith that focuses on various acts of charity”. There are five pillars of faith in Islam, and followers must fulfil them all to lead a good and moral life. The zakat requirement can be met by giving money or provisions.

The giving of ekmek (bread) is of special importance in Turkey because in Islamic belief, bread sustains life and the protection of life is sacred. “Bread … is absolutely critical to eating and is representative of hunger-satiation/starvation-desperation,” Armanios said.

In Muslim hadiths, the collected sayings of the Prophet Muhammed, bread is nimet, a blessing sent from God. If a piece of bread accidently falls to the ground it must be picked up immediately before placing it somewhere higher. Some people kiss it before doing so to further demonstrate their respect. Plain white bread is baked twice a day in Turkey and every meal is accompanied by a basket full of sliced fresh loaf. Leftovers are never thrown away; when bread goes stale, it’s made into French toast and breadcrumbs. I often see plastic bags containing old bread hanging off fences along my street, placed there for people to take either for themselves or to feed animals.

Ottoman sultans used this respect for bread to legitimise their rule and garner loyalty. According to Armanios, it was believed that a well-fed populace is an obedient one and far less likely to revolt if prices of food staples such as bread were kept in check. Market regulators, called Islamic muhtasib, policed the sale of bread to control the price and ensure cheap fillers weren’t used in place of flour (even today, bread prices are determined by the government). The Ottomans also encouraged those who could afford it to provide for those in need. But tradition has always been that when carrying out zakat obligations, the poor should not be embarrassed by having their identities revealed to the donors and vice versa.

Early on, in traditional Islamic societies, this was achieved by placing sadaka taşı (charity stones) in mosque courtyards. In his 2014 paper, associate sociology professor Ensar Çetin of Nevşehir Hacı Bektaş Veli University in Nevşehir, central Turkey, described them as “stalagmites… transformed from ancient porphyry columns with cavities [in] which to leave money. There [were] also cavities [in] the walls. It’s a model designed not to offend poor people so the giver and receiver remain anonymous to one another.”

These days, sadaka taşı have been replaced by websites with online zakat calculators, run by charitable foundations that rely on donations to help those in need. Individuals can calculate exactly how much money they should donate, traditionally 2.5% of their wealth. Askıda ekmek has gone online, too, with yemek.com, a popular Turkish website featuring daily recipes, asking readers to nominate neighbourhood shops promoting askıda ekmek. Their aim is to transform it from a local neighbourhood activity into a national resource listing participating bakeries, using the call to action, “Let us help people who live on the streets who cannot afford bread”.

One man has taken these technological advancements a step further. In 2012, Oğuzhan Canım read about bakeries in Kırıkkale, 80km east of Ankara, promoting the practice of askıda ekmek so more bakeries would participate. It made him think about ways to scale the custom in order to reach more people. Canım knew there was limited government aid for university students in Turkey and that there weren’t enough bursaries, scholarships and food grants to go around.

His solution is a social enterprise called Askidanevar (What’s on the Hook?), the first in Turkey to combine the concept of askıda ekmek with the reach of social media platforms. The idea may be innovative, but the aim is very simple: to connect university students in need to the companies that want to support them.

Askidanevar targets students because Canım believes they’re the future of Turkey. He wants young people to have the opportunity to read poetry, engage in the arts and pursue goodness, and become complete, well-rounded individuals. This way, he believes, they’ll not only succeed in their studies, they’ll also pay it forward and contribute more to Turkish society and the world, through a culture of sharing.

This holistic approach isn’t unusual in predominantly Muslim societies. The community or group takes precedence over the individual and the well-being of all is paramount. It’s normal in Turkey for individuals to look out for others, be it family, neighbours, colleagues or even strangers, in the belief this improves things for everyone.

Askidanevar maintains the askıda ekmek spirit of anonymity. Students only identify themselves when they upload their university cards on signing up. Once they’re members, they can click on a “Take” button to get a code to use for a free meal from a range of participating restaurants. With another click, they get the chance to receive books, magazines, theatre and concert tickets and other items by sharing or retweeting posts from Askidanevar. Companies click on a “Give” button to leave their details and information of what they’re offering.

Around 150,000 students are currently registered with Askidanevar, using around 500 donated food coupons each month. Since the social enterprise’s inception seven years ago, it has helped around half a million individuals, the majority in Istanbul, Ankara and Izmir, Turkey’s three biggest cities.

One student member I spoke to, Tuğba, learned about Askidanevar via Instagram. “Last year” she told me, “I started… university and did not meet new people [or] new friends. During a summit, which I went [to] thanks to [the] Askıdanevar ticket system, I [made] friends”.

For Tuğba, receiving a ticket to a summit at no cost, had an impact on her life beyond that one event. It made her new friends and gave her a sense of belonging at university, of being part of a new community; something she didn’t feel before.

At the heart of askıda ekmek – whether that’s leaving a loaf in a bakery or helping students access opportunities outside their studies – is an ethos of helping people, with no expectation of reward or recognition so that recipients maintain their dignity and improve their lives.

In a world divided by the pursuit of individual profit and torn apart by conflict, as Tuğba said, “That is amazing”.