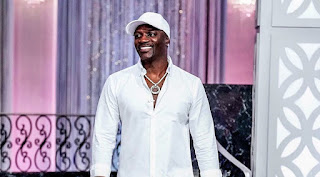 Akon is an unlikely superstar, according to Akon himself. He bets there's a good chance no other Billboard Hot 100 chart-topper has been a St. Louis-born Senegalese with a given name like Aliaune Damala Bouga Time Puru Nacka Lu Lu Lu Badara Akon Thiam.

The early years of his career were spent in semi-obscurity, writing and producing records for other rappers. But here we are in 2019, and Akon has become a household name. Even if you don’t regularly sing his nostalgic 00s bops into your hairbrush, chances are you’d still be familiar with his humanitarian missions in Africa.

Earlier this week, fans were let in on the secret to Akon’s success.

Ditching the dance floor, Akon took to the stage at the Sharjah Entrepreneurial Festival, tracing his journey from "car thief to pop star and entrepreneur" to the 2,000 people in attendance.

“It makes you ask the question: what is success? Is it fame or fortune? Does that measure what success means to you? Or is it faith?” he questioned. “For me, real success is faith. If God is not smiling upon me, I am not successful. I don’t care even if I have a billion dollars in the bank. And what good am I if have a billion dollars sitting in the bank in the first place?”

He credited his Muslim faith for allowing him to step back and reassess his career trajectory even when he was a rising star in the music industry, stating that it was his spiritual mindset that mapped out his plans for the future as a successful humanitarian entrepreneur.

Hinting that his motivations truly lie in reaching the hereafter, he revealed, “I don’t believe in having that much money sitting away without applying it to changing somebody’s life. Now I may not make a million dollars out of that transaction, but I may get a few good credits to go to paradise. I am cool with that.”