Q&A With Asma Shuweikh, The Muslim Hero Who Defended A Jewish Family 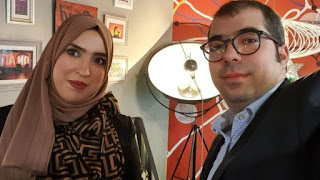 We caught up with Shuweikh over the phone on Wednesday morning. The stay at home mother of two lives in Birmingham; on the fateful day of the tube ride, she was in London visiting family.

The following interview has been lightly edited and condensed for clarity.

Why did you decide to intervene on the tube?

I decided to intervene because it was a very disturbing situation — the fact that he was talking to the children, and looking at the children and explaining to them that they’re not really Jewish people, and that they are going to be slaves — and I thought that was really, really uncalled for, honestly.

I’ve got my own two children — I’m a mother, and I’m also a practicing Muslim, and as a practicing Muslim, you have to speak up to injustice. If you see someone who needs help or someone that’s in trouble, especially when you’re going about your daily life, it’s your duty as a Muslim — and as a mother and as a British citizen — to go out of your way to help.

Who modeled this for you in your life?

My model was definitely our prophet Muhammad, peace be upon him. He did not accept any of this kind of intolerance toward ethnic minorities. He had friends from other faiths, from the Jewish faith and the Christian faith.

I mean, this is what Islam teaches us, but obviously it never gets shown in the media. This is what normal Muslims believe in but it does not get portrayed that much — which is why I decided to talk to people and explain it to them so that they understand what it’s really like to be a proper Muslim, and really a proper citizen as well, and even human being really. We should not accept anything like that.

My mum always told us to stick up for yourself and don’t allow people to discriminate against you for who you are. And I have to be an example to my children as well. They live in a multicultural society, so we have to show them how, because they’re the future.

Have you ever been harassed in public yourself?

Yes, when I was growing up, I was spat on, and people used to pull off my hijab. At that time, the Muslim community was less well known and there weren’t as many Muslims around so it was quite difficult. It’s not as bad now, but especially with what’s going on with Brexit, we still get a lot of attacks, slurs, racial aggression towards us. And when someone does say something like that to me, I do have to talk back, I do have to say something. It’s my character, really; I’m not the type of person who stands for anything like that.

That’s one reason why I spoke up on the tube: I did get a flashback of that day when that had happened to me. I thought, if you don’t want someone doing that to you, why would you allow it to happen to somebody else? Especially with children, it’s a very sensitive situation. If I was with my children on the tube and someone did that to my kids, I would like somebody to come up and say something.

On the tube that day, it wasn’t just me. There were other people who stepped in — the person who was filming stepped in between the man arguing and the victims. Another man tried to stop him, too, and he got a bit aggressive with him. And after both the family and I left the train, somebody else confronted the man and was having a bit of a discussion with him.

Did you tell your children about what you did on the tube?

Yes, of course I did, I had to. My son is still too young to fully understand what’s going on, but my daughter does. She was asking me questions: What did you do? And I always instill that kind of character in my children. I have to tell them, when you see something like this, you should not be quiet or allow people to discriminate against you or say anything bad to you. Stand up against what’s wrong in a respectful way.

I tell them that’s how to be a law-abiding citizen and a good Muslim, which is how our prophet, peace be upon him, taught us to behave in society — to coexist with other religions and other races.

Do you think the attacker actually took in anything you said?

My main purpose was to try to calm him down. I didn’t really want to reason with him. I think that speaking to him in a very calm manner, and getting kind of on his level so he doesn’t feel like I’m attacking him, was probably what made him calm down.

He attacked me as well, but you don’t see that in the video. After the camera switched off, he came up to me and got into my face and my personal space, and I just panicked. Then I told him to back off and I said you need to keep your distance, that I was just trying to help so this doesn’t escalate. He attacked my religion. He attacked what I was wearing. I didn’t expect any less, to be honest. I knew that if I was going to talk to him, that he was going to turn on me. But at least I didn’t have my children with me, while the other man did, so his situation was much more sensitive.

I don’t believe you can change somebody’s mind, if they’re very firm with their beliefs. But you can try to make them understand that that kind of behavior is unacceptable.

You later reunited with the father from the tube. What was that like?

It was lovely. I was thinking about them after I left the train, hoping they were okay. I had been in a rush to visit my friend in hospital, but I made sure the situation was quite calm before I left.

He brought me a lovely bouquet of flowers, we sat down, talked about our experiences, our backgrounds, what kind of food we like. I asked him about how his children and wife were doing. It was wonderful chit chat and I said it would be nice to keep in touch and he said he would.

Has the publicity changed your life at all?

Oh yes definitely! Anyone who knows me knows that I am not the type of person who likes the spotlight. I’m not very into social media and I didn’t have a Twitter account until my friends told me the video had exploded. A friend sent me a link and asked, Is this you or is this your look-alike? I said, No that’s me! I couldn’t believe it.

I had no recollection that someone was filming the incident. But I’m glad that they did film it, because at least now we can use it as a positive to help everyone to get together and be more understanding of one another’s background and faith.

When have you ever seen a story like this? You haven’t. Usually you see only the negative things about Muslims in the media, so if something positive happens, we should push it forward — especially because this wasn’t just any family; it was a Jewish family. There’s this kind of speculation about Muslims, that they don’t like Jews — which is wrong! It’s a completely wrong statement. It’s not true at all.

My message is that everyone can learn to coexist in a multicultural society. I think everyone should take time out of their lives to meet people from different backgrounds, not just believe what they see in the media. Befriend them. Meet the Jewish community, meet the Muslim community, meet the people who are passionate about their religion instead of just assuming what they believe and who they are.