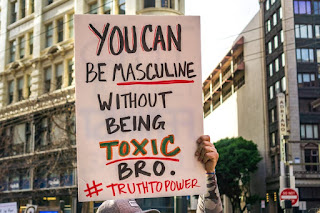 I really concurred with this comment on FB from brother Mohamed Ghilan.

With the increasing number of Muslim women speaking out against what they perceive to be not so much a double standard because that presumes sameness between men and women, but an injustice in terms of what's expected from them compared to Muslim men, we now have men pushing back and crying foul.

So this is to the males who wish to be men out there:

Some of you are asking for equalizing this calling out culture. If men are being called out to "man-up", then we should do the same with women to "woman-up". The problem with this is that women have been "putting up" with a lot from males that they didn't really have to put up with for a very long time.

What you think is "man bashing" doesn't even come in the same cosmic dimension to what a lot of Muslim women are subjected to up to our current times, even in the West where one would think they should technically at least have some means for recourse to get out of a bad situation.

It's a really sad commentary on how fragile some men's egos are that they can't even handle words on social media posts expressing the current situation many Muslim women are in. It also speaks to a blindness to the lived experience of a Muslim male and the things we take for granted.

This issue of toxic masculinity keeps coming up. In my view, if it's toxic, it's not masculinity anymore. The masculine and the feminine are Divine forces, and everything created exists as a product of the interaction between these two essential realities underpinning all of creation.

وَمِن كُلِّ شَيْءٍ خَلَقْنَا زَوْجَيْنِ لَعَلَّكُمْ تَذَكَّرُونَ
"And of all things We created two mates; perhaps you will remember." [Quran 51:49]

I'd rather call it toxic male chauvinism. I prefer this term because the dictionary defines chauvinism as "excessive or prejudiced support for one's own cause, group, or sex." That's really what we have when we see Muslim males engage in vitriolic commentaries against Muslim women who did nothing other than penned a few words. If anything, that just proved the women's point. Otherwise, why would someone get so worked up unless it struck some nerve?

What is toxic male chauvinism?

It's to view women as nothing but sexual objects who can also serve as reproductive machines, and that's the purpose of marriage for you.

It's to use those analogies of the chocolate and the wrapper or a diamond hidden in a safe when you talk about the hijab because women are edible objects or precious stones to be hidden away in a safe for you.

It's to pontificate about the obligation for Muslim women to wear the hijab while you go out publicly in your undershirts (yes, they're undershirts no matter how many times you've been told they're not).

It's to look for a well-educated woman in your search for a spouse but you then bury her aspirations and personal dreams once she accepts you for a husband under the guise of "she needs to pay attention to raising the children".

It's to call being with your own kids "babysitting" when your wife needs to have free time for her own pursuits, whatever they may be, instead of calling it what it is: being a father!

It's to expect that your wife clean after you and wash your laundry.

It's to marry a woman and give her the impression that she's getting into a marriage when in reality you were looking for a maid...or let's call it what it is, a legal concubine.

It's to exploit your wife's spirituality, which is more powerful than yours, and use the Quran and Sunnah to coerce her into accepting the unacceptable. It's the ultimate type of gaslighting if you really think about it.

It's to talk about all your "rights" as a husband in a marriage, but conveniently ignore your responsibilities and her rights.

It's to deny your wife the right to have her own domain where she feels safe and secure with you and instead put her in the same house with your parents so she can take care of them and be their maid.

It's to fool yourself into thinking you're taking care of your parents by having them live with you when in fact you just shirked your responsibility and put it on your wife who is under no obligation to carry it out.

It's to view marriage as some sort of power dynamic between spouses and use the analogies like manager and employee to establish that you're the boss, rather than approaching marriage as a partnership between two individuals who are both equally but differently deficient and that they're coming together to help each other grow.

It's to turn a marriage into a battle of rights and responsibilities as opposed to a loving and caring union with mutual respect, recognizing that your wife is a full human being with her own intellect, thoughts, and ideas that don't always have to align with yours.

It's to question a woman's adherence to Islam when she brings these issues up and then let your tongue loose on her with whatever filth Iblees inspires you with.

It's to try and dismiss Muslim women by attributing their concerns and grievances to feminism or secular individualism or whatever ism you wish to throw at them in hopes of silencing this conversation because it's "not Islamic".

It's to ask for equalizing the call out culture and demand that women also be asked to "woman up".

I could keep going with this, but it's long enough already and I think you get my drift. According to the Quran, men are supposed to be in service to women. That's what Qiwama (قوامة) is. But somehow, somewhere, at some point, Muslim men flipped this.

We need to take a long and honest look at ourselves and be prepared to engage in the hard work of undoing whatever sociocultural conditioning we've been subjected to. This is especially so if you really want to follow the Sunnah of the Beloved ﷺ, which is not just about putting on a turban and growing a beard.

There are lots of males. Becoming a man is a rite of passage, and being a toxic chauvinist doesn't count.

P.S. If none of this resonates with you and it sounds foreign to your experience and the dynamic you have in your marriage, then it's not about you and you can safely move on. But recognize as you do move on that this is the reality for A LOT of Muslim women out there.
Posted by Zafar Khan at 09:00