HOW BRITAIN DRESSES UP CRIMES IN ISRAEL AS ‘CHARITABLE ACTS’ 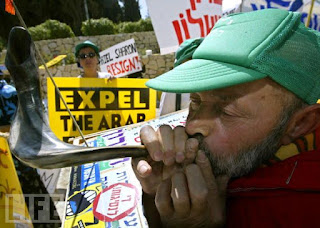 When is a war crime not a war crime? When, according to British officials, that war crime has been given a makeover as a “charitable act”.

The British state is being asked to account for its financial and moral support for a UK organisation accused of complicity in the ethnic cleansing of hundreds of thousands of Palestinians from their homeland. So far, it appears determined to evade answering those questions.

The target of the campaign is the Jewish National Fund UK (JNF UK), which describes itself as “Britain’s oldest Israel charity”. Noting its role in “building Israel for over a century”, the organisation boasts: “Every penny raised by JNF UK is sent to a project in Israel.”

In fact, donations to JNF UK were used to buy some of the 250 million trees planted across Israel since 1948, the year when 750,000 Palestinians were forced out at gunpoint from their homes by the new Israeli army. Those expulsions were an event Palestinians call their Nakba, or “catastrophe”.

Afterwards, the Israeli army laid waste to many hundreds of Palestinian villages, turning them into rubble. Forests planted over the villages were then promoted as efforts to “make the desert bloom”.

In fact, the trees were intended primarily to block Palestinian refugees from ever being able to return to their villages and rebuild their homes. As a result, millions of Palestinians today languish in refugee camps across the Middle East, evicted from their homeland with the help of the forests.

JNF UK raised the funds for a parent organisation in Israel, the Keren Kayemeth LeIsrael Jewish National Fund (KKL-JNF), which enforced the expulsions by using the donations to plant the forests. The Israeli state’s ethnic cleansing of the native Palestinian population was effectively disguised as a form of environmentalism.

Britain and other Western states appear to have accepted that barely concealed deception. They have long treated their local JNF fundraising arms as charities. JNF UK received charitable status in 1939, nearly a decade before Israel was created as a Jewish state on the ruins of Palestinians’ homeland.

The forests are still managed with money raised through tax-deductible donations in Britain and elsewhere. Since 1990, donations to JNF UK have been eligible for Gift Aid, meaning that the British government tops up donations by adding its own 25 percent contribution.

In effect, the ethnic cleansing of Palestinian villages has been subsidised by the British public.

Britain’s continuing sanction of these crimes – and others – is being belatedly given scrutiny by human rights activists in Britain.

The campaign gained parliamentary support a year later, when 68 MPs signed an early-day motion condemning the JNF’s activities and calling for its charitable status to be revoked. The motion was sponsored by Jeremy Corbyn, then a backbencher but now leader of the Labour Party, and attracted cross-party support, though no Conservative MPs backed it.

Nonetheless, the campaign has faced institutional resistance every step of the way. Over the past six years, appeals to the Charity Commission, a department of the British government, to intervene and remove JNF UK from its list of registered charities have been repeatedly rebuffed.

Rather than seeking explanations from JNF UK, British officials have largely ignored the evidence they have been presented with.

Trees ‘a weapon of war’

The campaign has highlighted one specific and egregious example of JNF UK’s work. The organisation raised donations to create a large recreation area west of Jerusalem called British Park, which includes forests, over three Palestinian villages that were destroyed by the Israeli army after 1948. A sign at the entrance reads: “Gift of the Jewish National Fund in Great Britain.”

Many of those who donated to the project, often British Jews encouraged to drop pennies into the JNF’s iconic fundraising “blue boxes”, had no idea how their money was being used.

The Stop the JNF campaign included testimony from Kholoud al-Ajarma, whose family was expelled from the village of Ajjur during the Nakba. Today, the family lives in the overcrowded Aida refugee camp, next to Bethlehem in the occupied West Bank.

KKL-JNF planted trees at British Park on land to which Ajarma’s family, and many others, still have the title deeds. In doing so, the group violated the protected status of such lands in international law.

In her submission, Ajarma wrote: “It was British pounds that helped destroy my village. The Jewish National Fund is not merely planting trees. These trees have been used as a weapon of war, a weapon of colonisation.”

Israeli scholar Uri Davis has observed that the establishment of British Park “ought to be classified as an act, and as a policy, of complicity with war crimes”.

In June, a commission official even wrote to the campaign with an astounding defence that appears to strip the term “charitable” of all meaning. He wrote: “In simple terms the test for charitable status is a test of what an organisation was set up to do, not what it does in practice.”

The commission’s apparent reasoning is that, so long as the JNF includes fine-sounding words in its mission statement, what it does in practice as a “charity” does not matter.

In April, Stop the JNF appealed the commission’s decision not to revoke JNF UK’s charitable status to the First-tier Tribunal. The judge, however, told them that neither Ajarma nor the campaign itself had a legal right to be heard. He concluded instead that only the attorney-general could overrule the Charity Commission’s decision. In October, the attorney-general rejected the campaigners’ claims without investigating them.

In an attempt to revive the case, Stop the JNF has submitted more than 4,000 letters of protest to the attorney-general, calling on him to reassess the organisation’s continuing charitable status.

A parallel call was made to the advocate-general of Scotland, which has a separate legal system.

The JNF did not respond to questions sent by Middle East Eye about its role in planting the forests, its charitable status and other criticisms of its involvement with Israel.

The establishment’s apparent unwillingness to confront JNF UK’s historical record is perhaps not surprising. The JNF was one of the key organisations that helped to realise a British government promise made in the 1917 Balfour Declaration to help create a “Jewish home” in what was then Palestine.

Two years later, Lord Balfour declared that the colonisation of Palestine by Zionist Jews from Europe was “of far profounder import than the desires and prejudices of the 700,000 [Palestinian] Arabs who now inhabit that ancient land”. Little, it seems, has changed in official British attitudes since.

Steele, the Charity Commission’s barrister, successfully urged the First-tier Tribunal not to get involved, arguing that it would be “drawn into matters of intense political controversy, for no obvious benefit to anyone”.

Surely, Ajarma and many millions more Palestinians would strenuously dispute that assessment. They would have much to gain should Britain finally demonstrate a willingness to confront its continuing role in aiding and comforting groups such as the JNF, accused of complicity in crimes against international law in historic Palestine.

As Stop the JNF organisers wrote in their own letter to the attorney-general: “These people [Palestinian refugees such as the Ajarma family] are not defined by the JNF as recipients of their charity, but they have human and legal rights which the actions of this charity unacceptably violate.”

The campaign has not only focused on JNF UK’s historic role in dispossessing Palestinians. It points out that the JNF is still actively contributing to Israel’s own grossly discriminatory and racist policies – another reason it should be barred from being considered a charity.

JNF UK’s accounts from 2016 show that it has funded the OR Movement, an Israeli organisation that assists in the development of Jewish-only communities in Israel and the occupied territories.

One such Jewish community, Hiran, is being established on the ruins of homes that belonged to Bedouin familes. They were recently forced out of their village of Umm al-Hiran – a move the legal rights group Adalah has described as “reminiscent of the darkest of regimes such as apartheid-era South Africa”.

On its website, JNF-KKL congratulates “Friends of JNF UK” for supporting the establishment of nearby Hiran Forest. The JNF claims the forest will “help mitigate climate change” – once again disguising ethnic cleansing of Palestinians as a form of environmentalism.

JNF UK’s annual accounts in 2015 also revealed that it contributed money to the Israeli army under the title “Tzuk Eitan 9 Gaza war effort” – a reference to Israel’s attack on Gaza in late 2014, whose death toll included some 550 Palestinian children.

A United Nations commission of inquiry found evidence that Israel had committed war crimes by indiscriminately targeting civilians – a conclusion confirmed by the testimonies of Israeli soldiers to Breaking the Silence, an Israeli whistle-blowing group.

Equally troubling, an investigation last month by Haaretz reported that, under Israeli government pressure, the KKL-JNF has been secretly directing vast sums of money into buying and developing land in the occupied West Bank to aid Jewish settlers, again in violation of international law.

The funds were allegedly channeled to Himnuta Jerusalem, effectively the JNF’s subsidiary in the occupied territories, disguised as funds for projects in Jerusalem.

Veteran Israeli journalist Raviv Drucker observed that KKL-JNF was rapidly converting itself into a banking fund for the settlers. He added that its “coffers are bursting with billions of shekels [and] the settlers’ appetite for land is at a peak”.

Given the lack of transparency in KKL-JNF’s accounts, it is difficult to know precisely where the funds have come from. But as more than $70m has been spent by KKL-JNF over the past two years in the occupied West Bank, according to Haaretz, the funds likely include money raised by JNF UK.

In any case, research by Stop the JNF suggests JNF UK has no objections to making “charitable” donations to settlements in the West Bank. Its accounts record contributions to Sansana, a community of religious settlers close to Hebron.

Settlements are considered a war crime under the Fourth Geneva Convention.

No ‘duty’ towards equality

KKL-JNF is a major landowner in Israel. Under a special arrangement with the Israeli government, it owns 13 percent of Israel’s territory – often lands seized from Palestinian refugees. The arrangement includes a provision from 1961 that the primary aim of the JNF in Israel is to acquire property “for the purpose of settling Jews on such lands and properties”.

In marketing and allocating lands only to Jews, the legal group Adalah has noted, the JNF in Israel intentionally rides roughshod over the rights of a fifth of the country’s population who are Palestinian by heritage.

In other words, the JNF is integral to an Israeli system that enforces an apartheid-style regime that prevents Israel’s Palestinian minority from accessing and benefiting from a substantial part of Israel’s territory.

This institutionalised discrimination has been made even more explicit since Israel last year passed the nation-state law, which declares: “The State views the development of Jewish settlement as a national value, and shall act to encourage and promote its establishment and strengthening.”

As the Stop the JNF campaign notes, British charities should abide by legal responsibilities enshrined in UK legislation, such as the 2010 Equality Act, which makes it illegal to discriminate based on “colour, nationality, ethnic or national origin”.

The JNF UK is clearly failing to abide by this core legal principle. It is operating in a foreign state where it has helped, over many decades, to fund activities that grossly violate both British law and international law. The evidence compiled by Stop the JNF indicates that JNF UK has itself been complicit in aiding the commission of war crimes, both in Israel and the occupied territories.

It has also given financial and moral succour to its parent organisation, which has crafted a system of apartheid that confers superior land rights on Jews over Israel’s Palestinian minority.

British taxpayers should not be subsidising institutionalised discrimination and crimes abroad – even more so when they are being dressed up as “charitable acts”.