Why white supremacists and Hindu nationalists are so alike 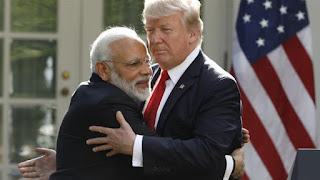 Over the last few years, especially after Donald Trump's victory in the 2016 US presidential election, we have been witnessing the normalisation, and rise, of a white-supremacist, ultranationalist brand of right-wing politics across Europe and the United States. While the shift towards extreme right alarmed many across the world, far-right ideologues of the Trumpian era swiftly found support in a seemingly unlikely place: India.

Many members of the so-called "alt-right" - a loosely knit coalition of populists, white supremacists, white nationalists and neo-Nazis - turned to India to find historic and current justifications for their racist, xenophobic and divisive views. Using a specific, "white nationalist" brand of Orientalism, they projected their fantasies about a racially pure society onto the Indian culture and in response received a warm welcome from Hindu fundamentalists in India.

While an alliance between the Hindu far right and the Western alt-right may appear confounding on the surface, it actually has a long history, going all the way back to the construction of the Aryan race identity, one of the ideological roots of Nazism, in the early 20th century.

In the 1930s, German nationalists embraced the 19th-century theory that Europeans and the original Sanskrit speakers of India who had built the highly developed Sanskrit civilisation - which white supremacists wanted to claim as their own - come from a common Indo-European, or Aryan, ancestor. They subsequently built their racist ideology on the assumed superiority of this "pure" race.

Savitri Devi (born Maximiani Portas), a French-Greek thinker and mysticist who later became a spiritual icon of Nazism, helped popularise the idea that all civilisation had its roots in this Aryan "master race" in India. She travelled to India in the early 1930s to "discover the source of the Aryan culture" and converted to Hinduism while there.

Devi worked as a spy for the Axis forces in India throughout World War II and left the country after the defeat of Nazi Germany using a British-Indian passport. In the post-war period, she became an ardent Holocaust denier and was one of the founding members of the World Union of National Socialists, a conglomeration of neo-Nazi and far-right organisations from around the world.

Devi still has a strong influence over the Hindu nationalist movement in India. Her 1939 booklet titled A Warning to the Hindus, in which she cautions Indian nationalists to embrace their Hindu identity and guard the country against "non-Aryan" influences, such as Islam and Christianity, is still widely read and highly regarded among Hindu nationalists. Perhaps not surprisingly, recently Devi and her theories have also been rediscovered by right-wing ideologues in the West and she is now considered an alt-right icon.

However, the current connection between far-right groups in the West and Hindu nationalists is limited neither to Devi's teachings nor the old myth of the Aryan race.

Today, the two groups share a common goal in eroding the secular character of their respective states and a common "enemy" in Muslim minorities. This is why they often act in coordination and openly support each other.

In the US, the Republican Hindu Coalition, a group with strong links to the Hindu nationalist movement in India, has been rallying behind President Donald Trump's controversial immigration policies, like the Muslim ban and the border wall. Trump's campaign strategist and prominent alt-right figurehead Steve Bannon once called India's Hindu-nationalist Prime Minister Narendra Modi "the Reagan of India".

Meanwhile, in India, a far-right Hindu nationalist group named Hindu Sena (Army of Hindus), which has been linked to a series of inter-communal incidents in India, has been throwing parties to mark Trump's birthday. The group's founder even claimed that "Trump is the only person who can save mankind."

In Canada, far-right Islamophobic organisations such as Rise Canada, which claims to "defend Canadian values" and combat "radical Islam", are popular among Hindu-nationalists. The group's logo even features a red maple leaf rising out of a lotus flower, which is often associated with Hinduism.

In Britain, the National Hindu Council of Temples (NHCTUK), a Hindu charity, recently caused controversy by inviting far-right Hindu nationalist Tapan Ghosh to speak at the parliament. Ghosh has previously suggested the UN should "control the birth rate of Muslims" and said all Muslims are "Jihadis". During his visit to the UK, Ghosh also attended celebrations of Diwali, the Hindu festival of lights, with cabinet ministers Amber Rudd and Priti Patel, and met the former neo-Nazi leader Tommy Robinson.

On top of their shared Islamophobia and disdain for secular state structures, the destructive actions, protests and aggravations of Hindu nationalists and the Western far right are also very much alike.

In November, the government of the state of Uttar Pradesh, which is led by the nationalist Bharatiya Janata Party (BJP), proposed to build a statue of the Hindu god Ram in Ayodhya, where the historic Babri Masjid was illegally demolished by Hindu nationalists in 1992. Only a month earlier, the same government pulled off a massive spectacle, having a helicopter drop off individuals dressed as Ram and Sita at the Babri Masjid site to mark the start of Diwali celebrations.

The sentiment behind these apparent attempts to intimidate Muslims and increase tensions between communities was in many ways similar to the far-right, white supremacist rally that shook Charlottesville in 2017. The neo-Nazis chanted "You will not replace us" as they marched through the streets of Charlottesville.

The far right in the US, Europe and Canada - emboldened by the electoral success of ultra-nationalist parties and individuals across the globe - aspire for a future in which secular protections are abandoned in favour of a system that favours the majority and protects the "white Christian identity" that they believe their nations were founded upon.

Likewise, Hindu nationalists in India, empowered by the BJP's landslide election victory in 2014, and inspired by European ethnonationalism and fascism, reject the constitutional secularism of the Indian state, propose that India is fundamentally a Hindu nation, and insist that minorities, especially Muslims and Christians, do not belong in a "Hindu country".

Ever since the start of the normalisation of far-right ideas in the West, a surge in racist, anti-Semitic and Islamophobic attacks was witnessed across the US and Europe.

The same happened in India after Hindutva officially became the governing ideology in the country. Over the past few years, countless Muslims, Christians and low-caste Hindus have been persecuted, assaulted and even killed for allegedly killing cows and many Muslims were targeted for allegedly participating in so-called "love jihad".

But despite all these similarities, there is major a difference between Hindu fundamentalism in India and far-right movements in the West: the liberal reaction to it.

While liberals and leftists quickly united against the rise of the far-right, they chose to largely ignore the rise of Hindu nationalism in the world's largest secular democracy. Especially after the Pittsburgh synagogue shooting, the necessity of expanding the anti-fascist praxis to include all forms of racism, from anti-Semitism to Islamophobia, was emphasised by many. However, the opposition to Hindu nationalism has not yet been made part of the broader movement, despite the well-documented suffering of India's minorities under BJP's rule.

Instead, the idea that India is a "Hindu nation" is being accepted as a given by the majority of liberals. The fact that India's constitution defines the state as "secular" is being ignored, and Hindu nationalism is being presented as a benevolent movement despite ample evidence to the contrary.

White vegans in the West, for example, rejoiced over the decision by several Indian states to ban the consumption of beef, without bothering to understand what these laws would mean for Muslims and Dalits who had already been suffering at the hands of so-called "cow vigilantes". Animal rights and veganism advocate PETA has in fact gone further and berated vegetarians who consume milk in India for "supporting the beef industry", thus playing into the communal politics of food in India.

Hindu nationalism and white supremacy are the two sides of the same coin. For the global movement against racism, white-supremacy and fascism to succeed, anti-fascists across the world need to acknowledge and stand up to the Hind nationalism threat.

Hindus themselves, both in India and abroad, also need to take action and raise their voices against the abuses that are being committed in their names. One such organisation already exists for diaspora Hindus in North America: Sadhana. It is a coalition of progressive Hindus based in New York City, seeks to stop the use of Hindu thought for the purposes of misogyny, queerphobia, Islamophobia and white supremacy.

However, Hindu nationalism cannot be defeated by Hindus alone. People around the world who engage with and comment on the Indian culture on a regular basis, including sub-urban Yoga mums in the US and vegan activists in Europe, should educate themselves on the secular nature and diverse identities of India. They need to join the resistance against the oppression and abuse of the country's minorities and stop perpetuating the Hindu-nationalist myth that India is a "Hindu nation".