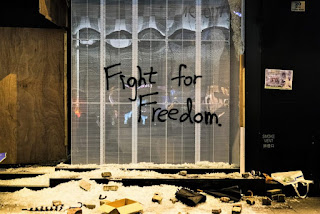 What started in June as a series of peaceful demonstrations against Beijing’s growing exertion of its rule over Hong Kong has devolved into escalated violence between protestors and the territory’s police force.

The chants in favour of democracy and opposition to the Chinese Communist Party have now been replaced by violent confrontations, culminating with the police shooting and killing an unarmed protestor at point blank range on Monday.

The protestors’ core five demands, known as “Five Demands and Not One Less”, have remained the same since the protests began. But, until now, only one of them has been met – the withdrawal of an extradition bill which would have allowed criminal suspects to be sent to China for trial. The other four include the establishment of an independent commission to investigate allegations of police brutality and misconduct; the retraction of riot charges against arrested and detained protestors; and the implementation of full democratic rights for all citizens.

In other words, the citizens of Hong Kong are demanding less of Beijing’s rule and influence and more democracy. While there’s little doubt a great many of the territory’s citizens and residents have grown tired of disruptions caused by the protests – with some questioning the means and methods deployed by some of the protestors – it is also true that an overwhelming majority of the island is grateful that these protests resulted in the withdrawal of the extradition bill.

There’s also no denying that these pro-democracy and anti-Beijing protestors rightfully and understandably believe that they are fighting for their lives and the future of their families. In almost every conversation I’ve had with those attaching themselves to the Anti Extradition Bill movement, the words “Xinjiang” and “Tibet” have come up.

In particular, Xinjiang’s Muslim concentration camps loom large in the minds of those who live within touching distance of China.

In a revelatory article for The Atlantic, Zeynep Tufekci shared a summary of conversations he held with protestors on the streets of Hong Kong this week. “They talked about Xinjiang and what China had done to the Uighur minority,” he wrote. “I’ve heard about the fate of the Uighurs from so many protestors over the months. China many have wanted to make an example out of the region, but the lesson Hong Kongers took was in the other direction – resist with all your might, because if you lose once, there will be a catastrophe for your people, and the world will ignore it.”

Protestors in Hong Kong have also familiarised themselves with recent revelations regarding the depraved level of mass rape, torture, executions and other forms of physical and psychological abuse meted out by Chinese authorities to the Uighur minority in an systematic effort to eliminate their culture and indoctrinate them into vigorously adhering to the Communist Party’s ideology.

When the Washington Post published a Uighur woman’s harrowing ordeal in a Chinese concentration camp last month, it went viral in Hong Kong, particularly among the protestors. It told of how 2,500 prisoners, ranging in age from 13 to 84, were subjected to the brutality of the Chinese state. “They would punish inmates for everything,” Sayragul Sauytbay told an interpreter. “Anyone who didn’t follow the rules was punished. Those who didn’t learn Chinese properly or who didn’t sing the songs was also punished.”

Her accounts regarding the pack rape of both men and women not only drew attention in Hong Kong, but also globally. She told Haaretz: “While they were raping her they checked to see how we were reacting. People who turned their head or closed their eyes, and those who looked angry or shocked, were taken away and we never saw them again.”

Uighur activists have now documented nearly 500 Muslim concentration camps in Xinjiang, with Randall Schriver, the top Pentagon official for Asia, estimating that the total number of detainees is “likely closer to three million citizens” or roughly 25% of the total Uighur population.

“If we lose, Hong Kong will become Xinjiang,” Jackool, a 30 year-old theatre technician and protestor, told AFP in September.

There’s little doubt that if, or when, Beijing sinks the full weight of its gigantic force into Hong Kong, the present reality of Muslims in Xinjiang is the future that awaits pro-democracy activists on the island territory.

The Chinese Communist Party views Islam as a cancer that has the potential to threaten or disrupt its economic imperatives in the north-west of the country, which is also how Beijing views democracy in Hong Kong – an ideological threat that has to be eliminated at some point or another.

Xiao Qiang, director of the Counter-Power Lab at the University of California at Berkeley’s School of Information, has said that the party views Xinjiang as its “frontline” testing ground for data-driven surveillance measures, which allow authorities to track the every movement of every Uighur every second of the day via GPS tracking devices, facial recognition cameras and DNA databases.

“China’s goal is to use these technologies to suppress dissent and to predict and snuff out any challenge to the ruling Communist Party’s grip on power,” observes The Washington Post.

While it’s patently obvious that protestors in Hong Kong are immediately focused on pressuring the Government into implementing democratic reforms, there is also little doubt of the mobilising affect China’s Muslim concentration camps are having on the territory’s eight million citizens.