‘It shut all my doors’: how a Quebec law banning religious symbols derails women’s careers 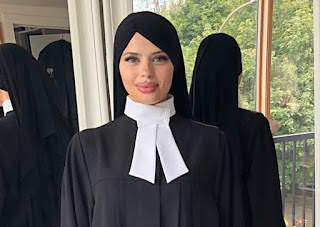 At 28, she is a newly minted lawyer with a master’s specialization in criminal law.

As a young woman of colour, her presence in Quebec courtrooms caught the attention of judges, other attorneys, even defendants – all of whom, she said, were happy to catch a glimpse of a rare non-white lawyer.

“In Montreal, they say that a third of people come from somewhere else, and you really see it in court. There’s a lot of black people, Arab people, Hispanics, and they were so happy to see me,” she said. After a year articling with the Quebec vehicle licensing bureau Farhat was hopeful for the future.

But the Quebec government dashed those dreams in June when it passed Bill 21, a controversial secularism law prohibiting the wearing of religious symbols by certain public-sector employees. Farhat wears a hijab, a non-negotiable item of clothing and expression of her Muslim faith.

“It really shut all my doors,” Farhat said of the law. “Five months ago I would have told you ‘I’m a future Crown attorney.’ I was so sure of my path. And now I’m like, OK maybe I’ll become an expert in insurance law?”

Farhat is just one of thousands of people whose careers have been derailed by Bill 21, which was rammed into law at 4am on a Sunday in June, after 16 hours of debate. She is watching closely as mounting legal challenges take on the discriminatory and possibly unconstitutional law.

The latest was filed last month by one of the province’s biggest school boards. Another challenge, also launched on a teacher’s behalf, is due back in court at the end of November. The law disproportionately affects the province’s education sector, where 74.5% of teachers are women.

The law doesn’t touch [most Quebecers] one bit, but for me, it has disastrous consequences on my whole life

Bill 21 came after a protracted debate in Quebec over minorities’ rights to religious accommodations. The law prohibits people in positions of authority from wearing religious symbols at work, including police officers, lawyers, judges and teachers. Other public workers such as bus drivers, doctors and social workers must only keep their faces uncovered.

To further complicate matters, some established workers have been grandfathered into an exception clause that allows them to keep their religious garments and their jobs – as long as they don’t get promoted, switch to a different employer or move to another city.

The legislation doesn’t name specific religious symbols, and theoretically all symbols – kippahs, turbans, crosses – are equally prohibited. However, because the law specifically mentions face coverings, and because of longstanding and effervescent anti-Islam sentiment in the province, many Québécois agree the main targets are Muslim women.

The bill was passed against a backdrop of growing anti-Muslim violence in the province. In 2017, six Muslims were killed and 19 were injured in a Quebec City mosque shooting. In Montreal, police figures show 58% of hate crimes in 2018 involved Muslim victims. Muslims represent about 3% of the province’s population.

Since publishing an open letter against Bill 21 last April, Farhat routinely receives Islamophobic screeds by defenders of the legislation. But she is determined not to be silenced. “I have a voice. I will use it, especially when my own government doesn’t want me to,” she said.

Amrit Kaur, the vice-president of the World Sikh Organization, receives her share of hate mail, too. The 28-year-old recent graduate is a vocal opponent of Bill 21: she would have been a Quebec schoolteacher this year had she been allowed to continue wearing her turban.

Instead, Kaur reluctantly packed up her things and moved across the country to Vancouver BC, to accept a teaching position. “I had no choice. I think at this point in my life, I need job security,” she said.

Kaur argued that the law reflects a profound lack of understanding about religions like Islam and Sikhism.

“Keeping your faith hidden is very much a Protestant way of doing things,” Kaur said. “You need to understand that my faith, and the way I practice, doesn’t work like that. And you don’t have to be OK with it. You just have to accept that I have that right to live my life the way I want to live my life.”

Although not all Sikh women – or men – wear turbans, Kaur says that it was her personal choice to do so. “I had pressure from people saying, ‘Don’t try it, people are going to racist towards you.’ But I’m going to live my truth.”

Among the province’s chief justifications for the law is that it improves gender equality by freeing women from the constraints of oppressive religions. Critics say it targets women from religious and ethnic minorities who are already well-integrated into society, and damages their ability to earn a living and gain economic independence.

“Muslim women with government jobs – you don’t get more integrated than that. They speak French unless they’re teaching at an English school, they’re part of a union. They’re complying with all the rules and regulations,” said Robert Leckey, the dean of McGill University’s law faculty, who also suggested that those affected could demand compensation in court.

For someone like Farhat, who is just starting her career, the damages are near incalculable. She regularly questions whether she can stay and raise a future family at home in Montreal. “The law doesn’t touch [most Québécois] one bit, but for me, it has disastrous consequences on my whole life,” she said.