Are you Pakistani? Are you a terrorist? The questions Indian Muslim children face at school 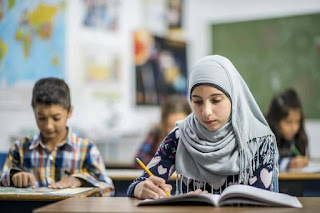 Stereotypes about the Muslim community have entered into classrooms and playgrounds, seeping in from the polarising rhetoric prevailing in the larger world of politics, society, mass media and social media
Nine-year-old Zoya* found herself answering a rather confounding question at her Delhi school recently: does her father make bombs at home?

What led to the question? The classmate had seen a picture of Zoya’s father in her school diary, in which he has a beard.

Things slowly got worse. Zoya’s classmates would often refuse to sit with her during lunch because they assumed that she was eating meat. “As if dal and chapatti don’t exist in a Muslim’s diet,” says her father Irfan Ahmed, a journalist. “This is such a stupid stereotype, that Muslims are always gorging on beef or mutton or whatever.” As these instances became more common, Ahmed taught his daughters to stand up to the bullying and not back down.

Fathima still remembers the day her 11-year-old son Abdul came back from school and asked if being a Muslim was a ‘bad thing’. “He said he did not want to go back to school. He was in tears,” says Fathima. “When I tried to find the reason, he asked me why Muslims were called ‘terrorists’. I was stumped.”

Fathima slowly discovered that for nearly two years, Abdul had been bullied in his up-scale school in Bengaluru by a group of boys in class. “My son was told that as a Muslim he had no place in India and that he should move to Pakistan,” says Fathima. “He was also repeatedly told that all Muslims were terrorists. He just couldn’t handle it anymore.”

Fathima then complained to the school, which eventually intervened, disciplined and counselled the bullies, who apologised to Fathima and Abdul. “But it happened only when I said I would file a police complaint,” says Fathima. “My son went through harassment only because he was Muslim.” By then, Abdul had been diagnosed with clinical depression.

Abdul had been bullied the previous year as well. “A boy on his school bus kept calling Abdul a Pakistani. “He first tried to ignore it but when he couldn’t take it anymore, he told me,” says Fathima, who then confronted the teacher in charge of the bus before the harassment finally stopped.

Stories like Zoya’s and Abdul’s are far from uncommon in the country today.

Stereotypes about the Muslim community have entered into classrooms and playgrounds, seeping in from the polarising rhetoric prevailing in the larger world of politics, society, mass media and social media.


“There is an anti-Pakistan, anti-Kashmir, anti-Bangladesh narrative that is endorsed by mainstream news television and is unfortunately also championed by the state and our leaders,” says Natasha Badhwar, writer and activist. “So a Muslim today is seen as a threat to the nation and does not belong to this country by default. This has certainly made a huge impact on a whole generation of children.”

Badhwar’s husband is a Muslim and her daughters have often had to deal with uncomfortable questions directed at their part-Muslim identity. “In my experience, almost every Muslim in this country will tell you about instances in their childhood where they were singled out,” says Badhwar. “There are memories of being bullied, but there are also memories of being supported and included. Unfortunately, today the dominant narrative seems to champion the exclusion of Muslims, and that’s what my daughters heard in their schools all the time.”

Nazia Erum, the author of the book Mothering a Muslim, says that the media is a prime example of how things have gone from bad to worse for the average Muslim in India. “Every single day, news channels in their debates circle back to something negative about Muslims — whether it is about the national flag, Pakistan or Vande Mataram. You cannot protect your children from this any more, you cannot keep these narratives away from them.”

Children after all imitate adults, and they do this in their interactions with their Muslim classmates too. “Initially, it is often a very innocent question from children where they will express surprise or shock that one of their peers is a Muslim. Where they’re coming from is that, being a Muslim is ‘bad’ or ‘wrong,’ so how come you are that,” Badhwar explains, articulating her children’s experience.

Badhwar’s daughter Sahar was in Class II when she was asked by one of her classmates if she was Pakistani. Sahar, who has cousins in Karachi, says she “thought it was a strange question because we had all gone to the same school since nursery. It did not even occur to me that it was an insult.” Sahar says, “I am not sure if even my classmates understood what they were asking me. They were just repeating what they had heard at home or on the news.”

Sahar, now 16, believes that the way news channels deal with Pakistan is strange. “The media talks about them [Pakistanis] as if they are aliens. That there is something so different about them that it is difficult for us to understand them. So, naturally, for my classmates, it was quite crazy that a girl sitting in their classroom for so many years had cousins in Pakistan, and was therefore so close to that alien world.”

This anti-Pakistan, anti-Muslim narrative does not only impact Muslim children. Nupur D. Paiva, a child psychologist in Delhi, came across a 10-year-old who wanted to encourage her classmates to discuss the situation in Kashmir. She is not Muslim. “She made these little chits and wrote ‘Kashmir’ on each of them and threw them around so that children would be prompted to think about what’s happening there,” says Paiva.

“A few days later, she began to have nightmares, dreams in which she was being attacked. That’s when she was brought to me and we talked about where this fear could be coming from. She told me about the chits and asked me if it was an illegal thing to do. Somewhere, she had picked up the message that it was a dangerous thing to do, and the fear was manifesting in her dreams.”

It also doesn’t help that history is being re-written in school textbooks. In Karnataka, for instance, the Bharatiya Janata Party is contemplating removing chapters on Tipu Sultan from school textbooks based on a recommendation by BJP MLA Appachu Ranjan, who described the 18th-century ruler as a religious bigot.

“It is very hard on teachers because nobody wants to be seen as standing up to the state,” says Badhwar. “When textbooks are being changed in Rajasthan to glorify Hindu kings, and Savarkar and Godse are being celebrated in public life, adults are responding to it with a kind of silence which they feel is their only safety. Nobody wants to be targeted. Even teachers who feel that this is wrong don’t really know which platform they can speak on. It is in their interest to play safe.” ”

A Muslim teacher in a South Delhi school recalls asking a Class XII student in oration class to pick a topic to speak on. The boy started to speak on Muslims being terrorists and how their religion teaches them to kill. “I’m not sure if he knew I was Muslim and I felt there was no point in bringing my identity into this. I didn’t stop him but I tried to reason with him and asked him about perpetrators of violence from other religions and if they too would be called terrorists. What can a teacher do apart from reasoning with students?”

Divisions among children are increasing, says Paiva. “Religion is not the only dividing line — socio-economic class is also a factor, increasing after schools began to accommodate students under the Right to Education Act. What is lacking is the sense of a community at school and an ability to co-exist, empathise and embrace differences.”

As a country, we have a lot of unaddressed intergenerational trauma and hate, especially related to Partition, adds Paiva. “If one looks at the emotional and psychological work done by Germany post-war, it is of an admirable level,” says Paiva. “Groups came together to reflect on the trauma and went through years and years of processing guilt, anger and loss. That is when they were finally able to come together as a community and apologise. We have taken a very practical approach of ‘get over it and get on with it’. But what we needed to do was hear about the losses and pain from both sides of the border, digest them, and then give ourselves time to heal.”

Meanwhile, what can we do to help our children today? “People who believe in the pluralist ethos of the country have to speak up,” says Ahmed. “We have a shared past. Today, if you are silent, you are guilty of abetting.” Then he adds as an afterthought. “Oh and try not to watch those news channels for a while.”