As Kashmir’s blackout continues, they wait for word of their son 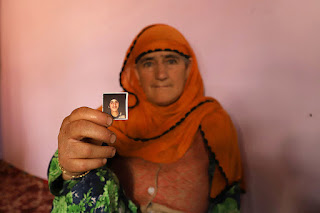 The ashes are cold in Umar Bashir Naikoo’s domed bread oven, and his family is desolate.

More than two months ago, the 14-year-old boy was seized from his village home here in the middle of the night, bundled into a police van, and driven away, according to his sister.

Since his father’s death, Umar, a newly fledged baker, had been the family breadwinner. But this fall, all his mother knew of her son’s whereabouts was that he was in jail 1,000 miles away, under a law allowing detention without charge or trial for up to two years – a law that prohibits the detention of minors.

“He used to feed the family,” said his mother, Saleema Bano, sitting with other relatives in a dim room of their home last month. “Only Allah knows how he is now.”

Now, after a habeas corpus petition established Umar’s age, the court has ordered his release – though his whereabouts are unclear, amid monthslong restrictions on communications within Kashmir and with the rest of the country. But his family’s experiences highlight the deep suspicion and frustration pent up in Kashmir today, particularly between residents and Indian police, that has dramatically deepened since summer.

A ‘closed-door’ impeachment process: Three questions.
Umar is one of an estimated 4,000 people arrested in Kashmir after the Indian government stripped the partially autonomous region of its special status in early August, provoking violent protests in the Muslim-majority area – including, his family claims, many youth held illegally under the controversial Public Safety Act (PSA).

Government officials say that more than 300 people were booked under the law, and many transferred to jails outside Kashmir, but that several of those detained under preventive custody have been released.

“The detentions are being constantly reviewed. People will continue to be released,” Jammu and Kashmir government spokesperson Rohit Kansal said at a press briefing on Oct. 12.

The government in New Delhi has defended the move to revoke the long-troubled territory’s status as a step to boost the economy, and quell decades of unrest and insurgency, stemming from many residents’ desire for independence or union with Pakistan.

Of the thousands of Kashmiris arrested, most were listed as “stone pelters and other miscreants,” according to a Reuters report. In recent years, a generation of young Kashmiris brought up amid the conflict have become increasingly active in showing their support for separatist rebels: attending protests, lobbing stones at soldiers, and attempting to protect militants. Security force tactics such as firing pellet guns, which have blinded scores of people, have further soured the mood toward Indian rule.

On the evening of Aug. 7, Umar was hard at work in the small bakery he had set up earlier this year, making piles of flatbread ahead of the Muslim festival of Eid al-Adha. He went to bed after supper, only to wake up to odd noises at 2 in the morning.

As he stumbled out of his bedroom he found soldiers and policemen ordering all men in the house to go outside, while his sisters and mother were huddled into a living room, according to his sister Gousia.

“What is your name?” a soldier asked Umar. As soon as he gave it he was whisked away, while the house rang with cries and wails.

Relatives said he was taken for no reason, but the fact that the police were looking for him suggests that they suspected Umar had taken part in protest rallies and perhaps thrown stones at Indian soldiers.

It has been more than ten weeks since his family last saw Umar, in the central jail in Kashmir’s capital, Srinagar, where dozens of families come every day in search of their arrested relatives.

“One of his teeth was broken when we met him,” recalled Gousia. “We took some clothes for him … but the officials said black clothes were not allowed” because of the color’s association with protests. “Next day when we went to see him we were told he’d been shifted to Varanasi jail” in Uttar Pradesh, 1,000 miles south, subject to a PSA detention order.

No member of his family could afford to visit. But they filed a habeas corpus petition in a Srinagar court, supported by a certificate from Umar’s former school bearing his birth date. The district magistrate, who had signed the PSA order, questioned the validity of the certificate, but a court-ordered inquiry confirmed his age. On Oct. 15, the government announced it would drop charges against Umar, and he will be released.

“The inquiry report proved that he was a minor and he can’t be jailed under the PSA [Public Safety Act],” says Mir Shafqat Hussain, who represented the teen in court. “Now, he has to be brought back from the jail and the family would have to receive him.” But even he does not know whether Umar has indeed been released, or where he is.