Let's stop being 'Humazah' and 'Lumazah' this Ramadan 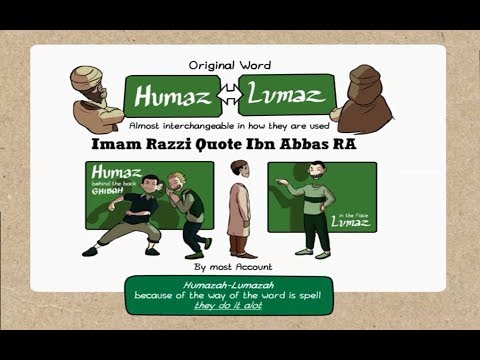 Allah عزّ وجلّ is cursing those who do either of the above.

When does Humaz and Lumaz occur? Usually gossiping. When a persons mind isn't covered in a higher purposed mindset. And thats why in the previous surah, surah Asr, Allah mentions the types of people who are in loss. It's only the people who have a low character who survive off picking on faults and insulting people.

Az-Zamakshari says - qasr (breaking something) - someones self-worth. Lumaz = sarcasm in someones face to insult them. I.e. "You're genius" (/sarcasm). Both the abuser and abused know its an insult but the abused cant defend themselves due to the sarcasm being used against them.

Someone cursing someone / foul language and laughing at someone falls into lumaz.

Ibn Abbas (r.a.) said: Humaza does gheebah (backbites) while lumazah points out the flaws in people over and over again.

humazah;those who call people by names they dont like.
Humazah; Makes fun of one you sit next to, even with their eyes i.e. A condescending look etc.

Ibn Keesan; the one who passes his eyes over people, points at them to humiliate them, who insults other people.

Ibn Jawza ' asked Ibn Abbas ; Who are these people who are cursed/wayl? Ibn abbas replied; they continuously insult and abuse people i.e. "That short man there, that ugly man" etc. They all condescend others and belittle them through; sarcasm, jealousy, and even jokingly.

It can happen in any matter of religion too. I.e. Attack peoples religiousness, their beard, their hijab/niqab etc. Since that is their following of the religion. Even if you disagree with them in fiqh issues, respect their opinion and dont insult them. Also includes making fun of peoples walking etc. You should not do any acts of humuz, lumuz, even through your eyes etc.

Al Shawkani; Normally AL wayl (THE destruction/curse) is used in a sentence, but instead waylun alone is used (nakira) in this ayah/verse. Why? Al wayl would mean that; destruction is for humazah and lumazah. Waylun however is a curse of destruction which has actually been placed upon such people as a statement of fact.
i.e. Salamun alaykum = peace be upon you. But it can also be like a prayer = may peace be upon you.
So similarly, waylun implies that a curse is placed upon a haamiz/laamiz (one who does humazah and lumazah), and may it be that way too.

Both these meanings are correct just by removing the Al (the), since if the Al was there, it would remove the concept of du'a [the prayer] i.e. May it be that way, and instead just imply that the curse is on such people. By having the du'a (prayer) there for their destruction, it places the haamiz/laamiz under pressure/stress that this du'a/curse might actually come true and cause them destruction, so they should change their bad characteristics into good ones.


Listen to the Video Lectures on Surah Humazah at Islam Awareness Homepage here.
Posted by Zafar Khan at 20:10