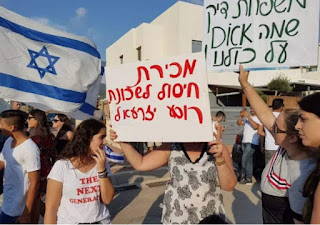 The only democracy in the Middle East!
The deputy mayor of the northern Israeli town of Afula has joined a demonstration calling for a house in the community not to be sold to an “undesirable” Arab-Israeli family.
Approximately 150 people marched through the town’s streets on Wednesday afternoon to protest against the owners of a house in the Yizrael neighbourhood who decided to sell to Arabs.
Flyers circulated before the protest called on Afula’s residents to “put a stop to this phenomenon… the sale of homes to those who are undesirable in the neighbourhood… from the beginning”.
Demonstrators carried flags and placards, one of which read: “Traitors against the Jews will get no rest.”
The protesters were joined by both Afula's deputy mayor, Shlomo Malihi, and its former mayor Avi Elkabetz, who is seeking a return to office.
“The residents of Afula don’t want a mixed city, but rather a Jewish city, and it’s their right. This is not racism,“ Mr Malihi said, according to Haaretz
Although around 20 per cent of Israel’s 8.6 million-strong population is Arab, a “nation state” bill currently being considered by the Knesset contains a clause that would allow the establishment of Jewish-only communities.
Link