THE WORSE GAZA GETS THE MORE MONEY ISRAEL MAKES 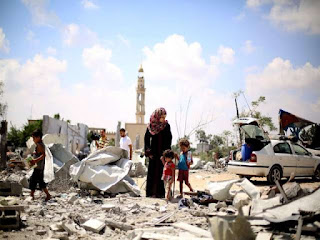 “The Gaza Strip has just declared ‘a state of emergency’. Whilst the BDS movement bolsters its wins, Gaza’s humanitarian crisis grows worse as the money pours into the hands of Israelis from international organizations seeking to help.
The humanitarian crisis in the Gaza Strip right now – brung about as a result of Israel’s 12 year, illegal siege – has seen next to no coverage, being completely ignored by most popular News outlets.
Lately, the cause for ‘Palestinian human rights’ has been growing in support amongst people of the West, with many coming to terms with the reality of Israel’s brutality against the Palestinians. As a result of growing support for the cause, many people are now active in sharing information regarding human-rights abuses, carried out against the Palestinians, few however are sharing the following information.
Israel is making big bucks off of the humanitarian catastrophe in Gaza, in fact, the worse the situation gets the more Israel makes.
If there is to be real efforts in a Boycott of Israel, perhaps not paying into the Israeli economy – international aid – would be a start.
Israel are actually rewarded – with hard cash, the usage of their services and work for their people – whilst they purposefully strangle the Gazan population. That’s right, people giving money to International Organizations, sending aid to Gaza, are actually contributing to an Israeli incentive to make Gaza’s conditions even worse.
How are International Organizations giving Israel the incentive to make Gaza’s condition more unlivable?
The answer to this is very simple, International Organizations, seeking to send aid into Gaza look for the cheapest options available to them, in order to send as much aid into the Strip as necessary. According to the United Nations Relief and Works Agency (UNRWA), more than 80% of Gaza’s population are dependent upon International relief, this means there is a lot of items crossing the Erez (Israel/Gaza) border to help the people.
The International Aid Agencies then take their budgets and spend on the cheapest and most efficiently delivered items available, which come from… you guessed it, Israel. Normally products produced in Jordan or other neighboring countries would be cheaper, but due to international import taxes – into Israel, then through the border into Gaza – the price ends up being cheaper for Israeli made goods.
In 1994 Israel and the “Palestinian Liberation Organization” (PLO) signed an economic deal, known as the ‘Paris Agreement’, this agreement ultimately concluded that no import tax was to be charged on items entering the Gaza Strip from Israel. As a result of this Agreement, Israel has been able to make a monopoly out of International aid, coming in to supposedly help the deprived people of the Gaza Strip.
People now maybe asking why the border between Egypt and Gaza is not utilized, the answer to this, is that the Rafah crossing (Egyptian border) opens a few times per year and is also at he mercy of Israeli decision makers, who will not allow for aid to come through frequently this way.
More than just buying a few Israeli good, this is an industry for Israel.
Israel are not just having a few goods purchased from them, they are literally supplying the food to most Gazans. More than 80% of Gaza is completely impoverished and the worse it gets, the more aid is needed. Gaza has a population of over 2 million, thats a lot of goods everyday, for a lot of people.
Israel are never scrutinized for this and if International Aid Organizations, decided at this point to buy from elsewhere, there is every chance Israel could just close the Gaza border.
Think about this, Israel strangles the population of Gaza and for the tighter the death grip, the more revenue they receive, its the ultimate display of dominance and inhumanity. Not only are goods being purchased, this creates for jobs in Israel stimulating their economy. Even in order to bring the goods into Gaza, Israeli trucks are being used for this.
So what is the solution?
Well for a start, this is something that the BDS should at the very least be discussing!
If we simply leave this very important issue alone, we will allow for the humanitarian crisis to get worse and worse in Gaza. This is a key issue to act upon and will effect Israel greatly, if we are able to change the situation at hand.
This article is a condensed version of this case, written to try and get this point across, this is an urgent matter as people are dying as a result of inaction on this issue.
If we want the siege on Gaza to end, we need to take away the incentive of Israel to make money off of it, or at the very least, make people aware that they are.”
Link