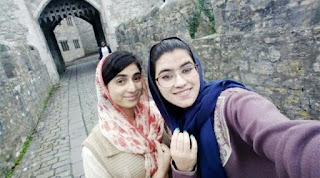 If you’re like most of us, you’ve already heard the story of the Taliban’s attempted assassination of then 15-year-old Malala Yousafzai.
The account is known by millions around the world – so much so that Malala is a near-household first name at this point.
But very few know about the other two other girls who were wounded in the attack back on October 9, 2012, with Malala.
Malala’s friend Shazia Ramzan was shot twice in the arm and her friend Kainat Riaz was shot in the hand. Malala’s injuries obvious required much more intensive medical attention and expertise – so much so that she was airlifted to Britain for treatment – but these other two teens faced daunting challenge on their own, without Western help, and in spite of it all, they continued their education in a country where girls are shot just for fighting for an education.
Riaz says she was so afraid that she “didn’t go to hospital [right away] because I felt that the guy would come again and he will shoot me….[F]or one week I couldn’t sleep at all. Because whenever I just closed my eyes [I pictured] what happened to us on the bus: lots of blood and Malala and my hand.”
Both Ramzan and Riaz say that they were still determined to go to school after they recovered – and that’s exactly what they continued doing.
People around them were scared to help out though.
“We [asked] other people for bus travel,” Riaz recalls. “Openly they told us, ‘No, we are scared. We are sorry we can’t pick you up.’ After three months we had a bomb blast behind my house. So my town told me, ‘This happened because of you and you should leave the town.’”
But Malala never forgot them. In 2013 when UWC Atlantic College, boarding school in Wales, offered her a scholarship, she declined, and asked instead that her friends be given the opportunity to come study in safety there.
Link