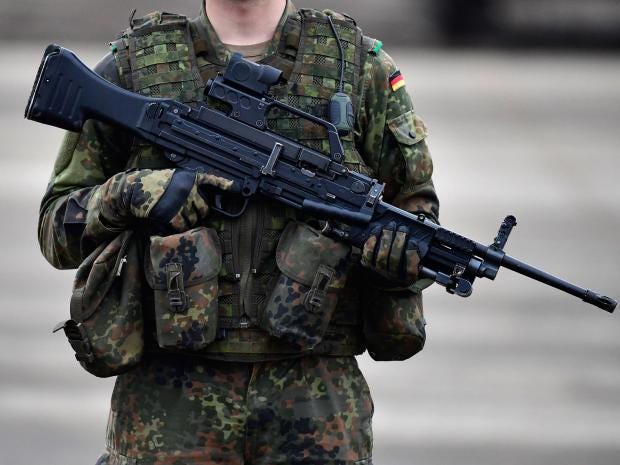 A German soldier found posing as a Syrian refugee has been arrested for allegedly planning a “false flag” shooting attack that would be blamed on asylum seekers.
The unidentified soldier was detained when he went to retrieve a loaded pistol he had hidden in a bathroom at Vienna International Airport.
The public prosecutor’s office in Frankfurt said the 28-year-old is suspected of planning a serious “state-threatening act of violence”, fraud and violating firearms laws.
The man’s suspected accomplice, a 24-year-old student, was arrested in Hammelburg for alleged involvement in the plot.
Police have searched the homes of the two suspects as well as their friends and workplaces, with detectives seizing “extensive material” including mobile phones, laptops and documents.
Prosecutors said the soldier had no permission for the 7.65mm pistol stashed in Vienna, while illegal weapons were also found at his accomplice’s house.
Both men remain in custody in Frankfurt as the probe continues.
The soldier was arrested days after prosecutors revealed that the man who orchestrated the Dortmund bus bombings had attempted to frame Isis to make money on shares.
Source