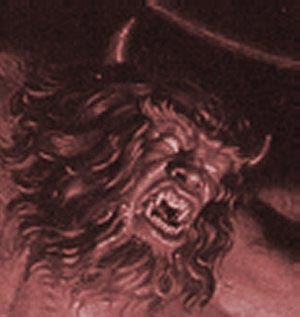 When God created Adam, all creatures were ordered to bow down to this new creation. One of the jinn, Iblis (the soon-to-be devil) refused. Iblis believed that because he was made of fire, and was physically different from Adam, he was superior. He had become jealous of Adam's closeness to God. He vowed that he would attempt to keep Adam from the path of righteousness, to function as a barrier between Adam and God with temptations of evil. Indirect temptations, which men would "justify" as having "good reasons" so that only the strongest would see that it was the work of the devil.

Men who believe themselves to be superior to women because of physical differences, who have become jealous of women's closeness to God and practice bid'ah--such as barriers in mosques to attempt to keep women hidden away--are making a familiar mistake. In their jealousy, a mirror of the devil's jealousy of Adam, they are attempting to forge a barrier between women and God, and they fall into the devil's trap of "justifying" these barriers--physical or metaphorical--disguising them to appear to have "good reasons." In their jealousy they attempt to take ownership of women's bodies, to police women's bodies, because they believe their own physical differences to be superior to that of women's, just as Iblis had believed that his own physical differences were superior to that of men's.