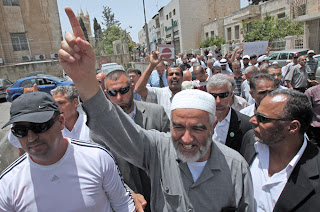 Writing in the Guardian newspaper Hanan Zoabi, a member of the Knesset, where she represents the Balad Party, asks how Sheikh Raed Salah's "struggle for equality" has become a "form of racism?"

She is no doubt perplexed to find a fellow defender of the Palestinian liberation struggle defined as a 'hate-preacher' by the British Government. "Since when" she pleads, "have states that boast of their democratic credentials acquired the right to arrest people for their political views?"

To answer Zoabi's questions and to explain the extraordinary decisions to ban, arrest and deport the Palestinian leader Sheikh Raed Salah from Britain it is necessary to understand the long standing role of influential pro-Israel, neo-conservative lobby groups in Westminster and Washington.

The best place to start is 9/11. As we approach the tenth anniversary of al-Qaeda's terrorist attack on the World Trade Centre and the Pentagon it has become fashionable to suggest that the worst excesses of the war on terror are behind us.

In truth, the pro-Israel, neo-conservative architects of the war on terror in Washington will be celebrating their ongoing success in falsely conflating a war against Palestinian resistance with what might otherwise have been a legitimate counter-terrorism strategy against al-Qaeda terrorists.

A key ingredient in this success has been to adopt the powerful and pejorative term 'hate-preacher' to describe leaders of Palestinian resistance against Israeli oppression and to put them in the same category as al-Qaeda terrorists.

Although taking their cue from sister think-tanks like Middle East Forum in Washington, Westminster based lobby groups and their media acolytes including Policy Exchange, Henry Jackson Society and the Centre for Social Cohesion, have been at the forefront of a decade long campaign to reduce Palestinian resistance leaders to the same status as al-Qaeda terrorists.

When the Washington based cheerleader for the war on terror Daniel Pipes came to Westminster in 2006 to chastise Ken Livingstone, the mayor of London at the time, for inviting Sheikh Yusef al Qaradawi to London, he insisted that politicians in Westminster should adopt a tougher response to 'hate preachers' like Qaradawi. Policy Exchange led the Westminster based campaign to endorse and cement Pipes' recommendation as policy.

Regrettably Westminster politicians like Ken Livingstone and Jeremy Corbyn, who was due to share a platform with Sheikh Raed Salah in London this week, are few and far between. Whether Labour, Conservative or Liberal Democrat, those politicians with their hands on the levers of power in Westminster have consistently adopted pro-Israeli recommendations to denigrate Palestinian support as anti-Semitic 'hate speech'.

'Hate speech' and 'hate preacher' has also been used to conflate Palestinian resistance leaders with leaders of far right organisations like Nick Griffin of the British National Party. This invidious denigration has been aimed at Muslim leaders in Britain as well as those abroad. Dean Godson, the architect of Policy Exchange's strategy in this arena, was the first to argue that mainstream Muslim leaders in Britain who failed to condemn Palestinian resistance in the same terms as al-Qaeda terrorism were on par with racist leaders like Griffin.

Established visitors to Britain like popular Muslim speaker Zakir Naik have also fallen foul of this same policy to ban 'hate preachers'. Naik's case in particular highlights the double standard that is being applied to the detriment of Muslim leaders in and outside Britain. It is inconceivable to think that a charismatic religious speaker of any other faith would have been banned from Britain for saying exactly the same as Naik.

Since British Home Secretary Theresa May unveiled a tough new 'Prevent' strategy last month that aims to crackdown on 'extremists' it has become inevitable that the pro-Israel, neo-con think-tanks in Westminster would become pro-active in their efforts to highlight candidates for exclusion like Sheikh Raed Salah. They will be delighted with the outcome, notwithstanding an apparent administrative slip up that initially allowed Sheikh Salah to enter Britain without question.

It is the great success of the pro-Israel, neo conservative lobby in Washington and Westminster that they have achieved an exceptional status for Palestinian and Muslim leaders. The war on terror has provided them with perfect cover.

However, Sheikh Salah and his supporters may have the last laugh. The British judiciary remains a thorn in the side of Westminster politicians who attempt to side step legal process in the name of the war on terror – or now, as part of a strategy to prevent extremism and hate speech as this counter-subversion strategy has been re-branded. If he is allowed to appeal the deportation decision, a British judge may well take the view that Sheikh Salah has far more in common with Nelson Mandela than the late Osama bin Laden or Nick Griffin.

Anger and frustration with Israeli oppression is hardly the same as unwarranted hatred of a minority or majority community of any kind.

Moreover, it is widely understood in Britain that Mandela's resort to terrorism against the apartheid regime in South Africa is inherently distinguishable from al-Qaeda's development of the same terrorist tactic. Former British Foreign Secretary David Miliband went further and suggested that the terrorist tactics of Mandela's group, the African National Congress, could be morally justified.

However, unlike Palestinian and Muslim leaders since 9/11, Mandela has never been asked to renounce the political grievances that prompted his resort to terrorism – merely the tactic of terrorism. The same is true of former Sin Fein and IRA leaders Gerry Adams and Martin McGuiness who remain staunch Irish republicans to this day.

It is difficult to find anything in Sheikh Salah's so-called hate speech that would not have occasioned an entirely opposite response from the British Home Secretary had the words been uttered by a non-Muslim visiting Britain.

It is to be hoped that common sense will prevail in this case. If Sheikh Salah is able to share future platforms with the London MP Jeremy Corbyn they will form a strong alliance against political injustice which is the only sound basis for public safety in the age of al-Qaeda inspired terrorism. Corbyn has demonstrated how effective Palestinians such as Mohammed Sawlaha have been against al-Qaeda propagandists in London. Together Corbyn and Salah offer justice and hope against the real purveyors of hate speech in Westminster and Washington.

Dr Robert Lambert is Co-Director of the European Muslim Research Centre and the University of Exeter and author of Countering al-Qaeda in London which will be published by Hurst in September 2011.