When will the desperate dictators learn 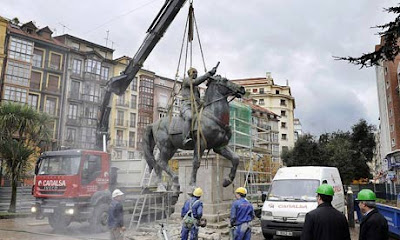 The dictators often feel that their rule will last forever, they will never be held accountable, people will remember and praise them forever. Unfortunately this is not the case.

Spain's former dictator General Francisco Franco was finally knocked off his pedestal yesterday as workmen removed the last public monument to him on the mainland from a square in the northern port city of Santander. The statue was around for 44 years with Franco dead for 36 years. Sure people in Spain will consider it a good riddance.

We saw a similar thing in case of Saddam who installed his own statues everywhere in Iraq probably thinking that his rule and legacy will last forever. Unfortunately for him, people took lot of delight in bringing his statues down.

And we should not forget the despo called Niyazov from Turkmenistan who suffered a similar fate and is now confined to the book of ancient Turkmenistan history.

Now Mugabe is doing something similar in Zimbabwe and he thinks that the country belongs to him and his rule will last forever. Meanwhile people are dying due to cholera, aids, malnutrition, etc.

We should all remember Allah's wise words:

[But those will prosper who purify themselves, glorify the name of their Lord, and (lift their hearts) in Prayer. Nay (behold), you prefer the life of this world; but the Hereafter is better and more enduring. And this is in the Books of the earliest (Revelations), the Books of Abraham and Moses.] (Al-A`la 87:14-19)

There is also a hadith that prophet Muhammad (peace and blessings be upon him) mentioned:

My Lord gave me nine (bits of) advice and I give them to you. He advised me:

- To be sincere whether in private or in public

- To do justice whether in anger or in happiness

- To be moderate whether in riches or in poverty

- To give to those who deprive me

- To forgive those who do wrong to me

- That my silence be thoughtful

- That my speech be mindful (of Allah)

- That my vision be to take admonition. (Reported by Razeen)