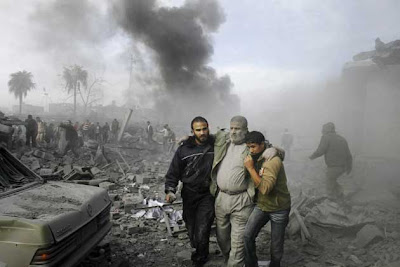 An injured Palestinian is helped from the rubble following an Israeli missile strike in Rafah
More than 271 people (mostly innocent) have been killed in the latest installment of Israeli War Crimes. More than 700 people have been injured in this latest aggression.

Said Masri, 57, told Associated Press that he had sent his nine-year-old son out to buy cigarettes minutes before the air strike and could not now find him. "May I burn like the cigarettes, may Israel burn," he wailed.

"Where are my sons?" screamed Um Ibrahim as she ran hysterically looking for her little kids. She lives near a security compound Israeli planes pounded to the ground on Saturday.

Bombs targeting a Hamas security force building badly damaged an adjacent school, and several children were injured. We heard of many other targets around the Gaza Strip. It reminds me of the "shock and awe" campaign the Allies launched over Baghdad in 2003. But shock and awe did not bring stability or peace.

The United Nations Security Council urged an immediate halt to all military activities in the Gaza Strip and called for the humanitarian crisis faced by Gaza's 1.5 million residents to be addressed.

Mustafa Barghouti, a member of the Palestinian Legislative Council, rejected the Israeli government's claims that the air raids were in self-defence. "This is a bloodbath, the bloodiest bloodbath since 1967," he told Al Jazeera. "This is an attack on the civilian population of Gaza."

I think this is very calculated move from Israel. First the people of Gaza were starved, then the borders were just opened to pass basic essential supplies. Then came the missiles which actually hit some of the fuel tankers and petrol stations to cause maximum damage. They also hit a mosque maybe challenging Allah. The current Bush administration are oblivious to the suffering of Palestinians and have already blamed Hamas for this tragedy. IMHO, without offending anyone, it would be like saying that after 9/11 tragedy, Bush administration was responsible for that and none of the blame lied with the perpetrators of the crime.

Fortunately the world is not as blind as the Bush administration and has 'requested' Israel to stop the Holocaust in Gaza.
Posted by Zafar Khan at 10:26