Israel strangling Gazans to death while the world looks on 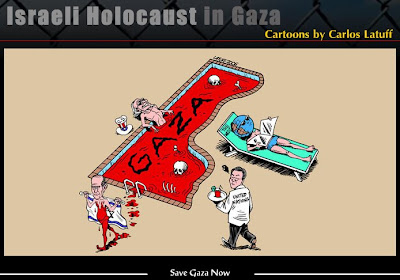 Holocaust in Gaza - Carlos Latuff's Cartoons
Robert Fisk rightly says in The Independent: We've got so used to the carnage of the Middle East that we don't care any more – providing we don't offend the Israelis. It's not clear how many of the Gaza dead are civilians, but the response of the Bush administration, not to mention the pusillanimous reaction of Gordon Brown, reaffirm for Arabs what they have known for decades: however they struggle against their antagonists, the West will take Israel's side. As usual, the bloodbath was the fault of the Arabs – who, as we all know, only understand force.

By last night, the exchange rate stood at 296 Palestinians dead for one dead Israeli. Back in 2006, it was 10 Lebanese dead for one Israeli dead. This weekend was the most inflationary exchange rate in a single day since – the 1973 Middle East War? The 1967 Six Day War? The 1956 Suez War? The 1948 Independence/Nakba War? It's obscene, a gruesome game – which Ehud Barak, the Israeli Defence Minister, unconsciously admitted when he spoke this weekend to Fox TV. "Our intention is to totally change the rules of the game," Barak said.

Yes, Israel deserves security. But these bloodbaths will not bring it. Not since 1948 have air raids protected Israel. Israel has bombed Lebanon thousands of times since 1975 and not one has eliminated "terrorism". So what was the reaction last night? The Israelis threaten ground attacks. Hamas waits for another battle. Our Western politicians crouch in their funk holes. And somewhere to the east – in a cave? a basement? on a mountainside? – a well-known man in a turban smiles.

Johann Hari, also writing in the Independent rightly points out: To understand how frightening it is to be a Gazan this morning, you need to have stood in that small slab of concrete by the Mediterranean and smelled the claustrophobia. The Gaza Strip is smaller than the Isle of Wight but it is crammed with 1.5 million people who can never leave. They live out their lives on top of each other, jobless and hungry, in vast, sagging tower blocks. From the top floor, you can often see the borders of their world: the Mediterranean, and Israeli barbed wire. When bombs begin to fall – as they are doing now with more deadly force than at any time since 1967 – there is nowhere to hide.

Ordinary Palestinians were horrified by this, and by the fetid corruption of their own Fatah leaders, so they voted for Hamas. It certainly wouldn't have been my choice – an Islamist party is antithetical to all my convictions - but we have to be honest. It was a free and democratic election, and it was not a rejection of a two-state solution. The most detailed polling of Palestinians, by the University of Maryland, found that 72 per cent want a two-state solution on the 1967 borders, while fewer than 20 per cent want to reclaim the whole of historic Palestine. So, partly in response to this pressure, Hamas offered Israel a long, long ceasefire and a de facto acceptance of two states, if only Israel would return to its legal borders.

Rather than seize this opportunity and test Hamas's sincerity, the Israeli government reacted by punishing the entire civilian population. It announced that it was blockading the Gaza Strip in order to "pressure" its people to reverse the democratic process. The Israelis surrounded the Strip and refused to let anyone or anything out. They let in a small trickle of food, fuel and medicine – but not enough for survival. Weisglass quipped that the Gazans were being "put on a diet". According to Oxfam, only 137 trucks of food were allowed into Gaza last month to feed 1.5 million people. The United Nations says poverty has reached an "unprecedented level." When I was last in besieged Gaza, I saw hospitals turning away the sick because their machinery and medicine was running out. I met hungry children stumbling around the streets, scavenging for food.

It was in this context – under a collective punishment designed to topple a democracy – that some forces within Gaza did something immoral: they fired Qassam rockets indiscriminately at Israeli cities. These rockets have killed 16 Israeli citizens. This is abhorrent: targeting civilians is always murder. But it is hypocritical for the Israeli government to claim now to speak out for the safety of civilians when it has been terrorising civilians as a matter of state policy.

According to latest estimates more than 300 people have died, mostly young children and teenagers. People are also dying needlessly because of power blackouts 12 hours of the day and medicines in short supplies. Meanwhile Israel has continued bombing for the second day running. Maybe people are scared in condemning Israel because they can always play the magic word called "Anti-Semitism".

The initial reaction from Britain and the United States will have been interpreted in Israel as weak. Neither Gordon Brown nor the Foreign Office called on Israel to halt its bombing raids as the Palestinian death toll rose. But a Downing Street spokesman called on the "Gazan militants" to "cease all rocket attacks on Israel immediately".

There have been protests throughout the world but the common man's voice is never enough. In Europe protests took place in Paris, London and many other cities. As usual Israel has stopped neutral observers from entering Gaza. Reminds me of what Mugabe has been doing in Zimbabwe. According to Islam Online, Gaza Strip has turned into a mass grave. Lets hope that Israel does not build another Museum of tolerance on it.

Quotes of the day:

"I was at work. Someone from the hospital called and said they had found my son," said Marwan Abu Rabia, 44, a plumber. "I went straight to the hospital and found him lying on the floor outside the morgue. There were too many bodies. It looked like a massacre."

Mohammad Jahjouh, 21, lay on a hospital bed with cuts to his legs and side. He was injured late on Saturday night when an Israeli missile struck a mosque close to the hospital. "I thought I was dead but then I started to move my hands and legs and I screamed for help," he said. He was carried into the hospital. "It's unjust, unfair and aggression. After this huge number of casualties it would be a sign of weakness for us to ask for a ceasefire."

Protesters burned Israeli flags and fired AK-47s in the air at demonstrations across Iraq. "We have been waiting for an action from Arab leaders for almost 60 years," said Jaleel al-Qasus, the Palestinian envoy to Iraq, at a protest in the Baladiyat district of Baghdad. "Our efforts have been in vain."

Dr Haidar Eid, a Gazan academic who saw the bodies and children with amputated limbs, told Haaretz journalist Amira Hass: "To pick a time like this, 11:30 [AM], to bomb in the hearts of cities, this is terrible. This choice was intended to cause as large a massacre as possible." The targets were not the training camps of Hamas's military wing, which were empty when the jets struck, but rather police stations. The raids were intended to destroy the infrastructure on which Hamas builds its administrative as much as its military hold over Gaza. But that means killing policemen, not just the militants who assemble and fire the rockets. Presumably it also means targeting judges, officials, and doctors too.

"I was having my dinner when I heard the missile's whistle," a helpless Abu-Fatahi told IslamOnline.net from his bed at Al-Shifa hospital in Gaza City. In just seconds, the missile hit his family's house in the Dir Al-Balah City, razing it to the ground. "I flew in the sky and then I found myself lying on the floor at our neighbors' house," he recalled the harrowing moments with tears flashing in his eyes. Abu-Fatahi can't remember what happened next. He woke up with head injuries. It was later that he knew that all his 15 family members who were in the house were also hospitalized.

It is hell and chaos, says Fikr. Gaza has experienced severe attacks before, but nothing on this scale. Hundreds of anxious and terrified people are searching hospital wards and the bodies to find sons, daughters, relatives. When a family member is identified among the dead, the family is told that they must bring their dead relative away – there is simply no space, and more dead and injured are still arriving.

There are people without their legs in very severe pain. The doctors and nurses were trying to give them painkillers and to keep them alive. Patients are lying there knowing they've lost their legs. Some were asking God if they could die. They were in a terrible psychological state.

The Bush administration began its tenure with Palestinians being massacred and it ends with Israel committing one of its largest massacres yet in a 60-year history of occupying Palestinian land. Bush's final visit to the country he chose to occupy ended with an educated secular Shiite Iraqi throwing his shoes at him, expressing the feelings of the entire Arab world save its dictators who have imprudently attached themselves to a hated American regime.
Posted by Zafar Khan at 10:42