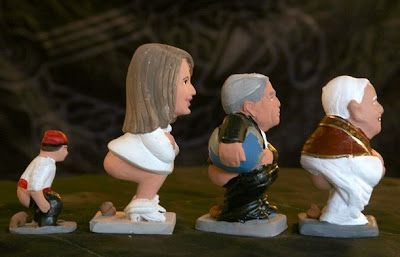 From left: A traditional Catalonian caganer, Spanish Princess Letizia, US President George W. Bush and Pope Benedict XVI.
A Caganer is a little statue found in Catalonia, in neighbouring areas with Catalan culture such as Andorra, and in other parts of Spain, Portugal and Italy.

In Catalonia, as well as in the rest of Spain and in most of Italy and Southern France, traditional Christmas decorations consist of a large model of the city of Bethlehem, similar to the Nativity scenes of the English-speaking world but encompassing the entire city rather than just the typical manger scene. The caganer is a particular feature of modern Catalan nativity scenes, and is also found in other parts of Spain and southwestern Europe, including Salamanca.

Accompanying Mary, Joseph, Jesus, the Shepherds and company, the caganer is often tucked away in a corner of the model, typically nowhere near the manger scene. There is a good reason for his obscure position in the display, for "caganer" translates from Catalan to English as "pooper", and that is exactly what this little statue is doing — defecating.

Catalans create Christmas Nativity scenes using models and hide the figures in them before inviting friends to find the figures. Catalans believe the "caganer", by creating faeces, fertilises the earth and brings prosperity and luck for the coming year.
Posted by Zafar Khan at 09:32