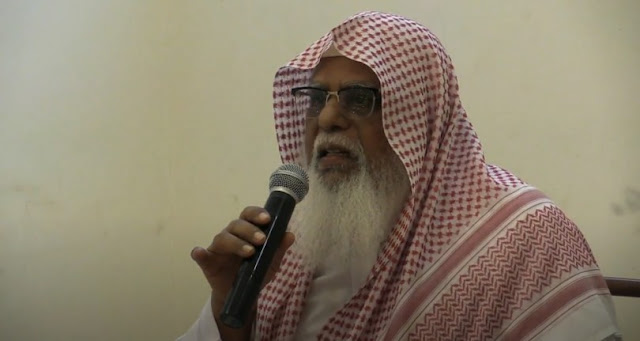 Earlier today, on the day of Arafat, one of the greatest scholars of Islam in recent times has died. Shaikh Zia ur Rahman Azami lived in Madinah and his janazah (funeral) will be conducted at the Prophet’s ﷺ Mosque in Madinah and the burial is due to take place in Al Baqi al Gharqad.

Born “Banke Laal” to a Brahman Hindu family in India, he converted to Islam at just 18 years old against pressure from his family. His passion for learning Islam made him attend a madrasah. After graduating from the madrasah with high marks, he was accepted to study at the Islamic University of Madinah.

Shaikh Zia Ur Rahman Azami’s dedication in the field of hadith excelled him to the point where he became the Dean of the Faculty of Hadith at the Islamic University, where he had previously studied. After retiring from this role he was appointed as a teacher in the Prophet’s ﷺ Masjid in Madinah.

He authored an internationally recognised work titled “Quran Encylopedia” which classified and explained the words of the Quran in alphabetic order. The book was translated into other languages.

His greatest work was yet to come and saw him complete a task no one had done in over 1400 years of Islam.
Shaikh Zia Ur Rahman Azami compiled all of the Sahih hadith (authentic narrations from the Prophet Muhammad ﷺ) into a single book. He used over 200 books to compile it and when finished the compilation had 20 volumes without a single hadith repeating itself. Every hadith used was Sahih and he compiled over 16,000 hadith. The title of the book is “Al Jami’ al-Kamil fi al-Hadith al-Sahih al-Shamil”

When I met him in Ramadan 2018 he said he was motivated by questions from non-Muslims on hadith. He said non-Muslim asked him “Where is the Sunnah” and we replied that they are in this book and that book.

My brother and I sat with the Shaikh for most of that night as we discussed many topics while sharing Pizza and later tea. He said Muslims needs to remove misguidance which has gripped the Muslim world today using the light of the Quran and hadith, in the same way filth is removed with clean water.

These words of the Shaikh were one of the motivating factors which lead us to launch itiba.tv

For his contributions to Islam Shaikh Zia Ur Rahman was given honorary citizenship of Saudi Arabia, an honour which is rarely granted.

Despite being born in India to a Hindu family, he made some of the greatest contributions to Islam in modern times. Now he will be buried in Baqi al Gharqad near the graves of the family and companions of the Prophet Muhammad ﷺ.

We ask Allah to forgive his shortcomings and admit him to Jannah al Firdaws and to give his family sabr.