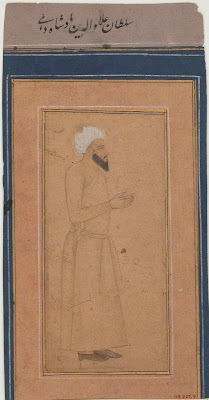 Alauddin Khilji was born in Delhi in 1266 CE, lived his entire life in the Indian subcontinent, and ruled as sultan of Delhi from 1296 CE – 1316 CE. By any definition, he would have to be called an Indian monarch, not a foreign invader. As a ruler, he would prove himself to be one of India’s greatest warrior kings and one of the world’s great military geniuses.

Historical details about the Khiljis are obtained from fundamental sources such as Ferishta, who lived during the time of the sultan of Bijapur, Ibrahim Adil Shah II, and Ziauddin Barani, who lived at the time of Mohammad Bin Tughlaq and Firuz Shah Tughlaq. These accounts are well-summarised in the works of eminent contemporary historians such as K.S. Lal, Satish Chandra, and Peter Jackson.

Khilji greatly expanded the empire that he inherited from his uncle, Sultan Jalaluddin Khilji, after killing him. Many of his conquests were of kingdoms ruled by Hindu kings, including Chittor, Devgiri, Warangal (from where he acquired the famous Kohinoor diamond), Gujarat, Ranthambore, and the Hoysala and Pandya kingdoms. He was able to do all this not because these other kingdoms were weak, but because he was a great soldier and general with a well-trained and disciplined army, using superior Turkic cavalry and infantry tactics, and had built a solid economic base which provided him with the resources to finance these campaigns.

During Khilji’s rule, the Mongols of the Chaghatai Khanate under Duwa Khan repeatedly tried to invade the Indian subcontinent. The attacks that occurred during the reign of Alauddin Khilji were not the first time that the Mongols had invaded India. But, as Lal puts it, “All these were minor invasions as compared with those that occurred in the time of Alauddin; and it was the good fortune of India that the most tremendous assaults were delivered to this country when a strong monarch like Alauddin was the ruler.”

Khilji, by his military brilliance, managed to defeat the Mongols not once, but five times, and avoided defeat a sixth time even when taken by surprise, as the Mongols attacked with massive forces.

The first invasion attempt was carried out in 1298 CE, and involved 100,000 horsemen. Alauddin sent an army commanded by his brother Ulugh Khan and the general Zafar Khan, and this army comprehensively defeated the Mongols, with the capture of 20,000 prisoners, who were put to death.

In 1299 CE, the Mongols invaded again, this time in Sindh, and occupied the fort of Sivastan. Alauddin despatched Zafar Khan to defeat them and recapture the fort, which he did, even without the need for siege machines.

This humiliating defeat prompted Duwa Khan to attempt another full-scale assault on India in 1299 CE, and he sent his son, Qutlugh Khwaja, with 200,000 soldiers, determined to finish off the Delhi Sultanate once and for all. The Mongol army came fully equipped for this assault on Delhi and for a long campaign, with sufficient food provisions. Alauddin’s own advisors were panic-stricken and advised him not to confront the dreaded Mongols who had come in such force.

It should be mentioned here that Alauddin’s predecessor, Jalaluddin, had averted war with the Mongols in a previous attack by agreeing to humiliating demands from them. But Alauddin was determined to fight to the end. As Lal describes it, he told his advisor,

“How could he hold the sovereignty of Delhi if he shuddered to encounter the invaders? What would his contemporaries and those adversaries who had marched two thousand kos to fight him say when he ‘hid behind a camel’s back’? And what verdict would posterity pronounce on him? How could he dare show his countenance to anybody, or even enter the royal harem, if he was guilty of cowardice, and endeavoured to repel the Mongols with diplomacy and negotiations? … ‘Come what may, I am bent upon marching tomorrow into the plain of Kili, where I propose joining in battle with Qutlugh Khwaja.’”

Alauddin met Qutlugh Khwaja at Kili, and the day was won by the bravery and martyrdom of his general Zafar Khan. (That the Mongols retreated because of Zafar Khan’s actions is the only explanation postulated by Barani, and quoted by Lal and Chandra; however, Jackson doubts this explanation and says the real reason the Mongols withdrew was that Qutlugh Khwaja was mortally wounded in the battle, a fact confirmed by other sources.) The defeated Mongols went back to their country without stopping once on the way.

However, Duwa Khan was not satisfied. In 1303 CE, he again sent a huge force of 120,000 horsemen to attack Delhi, under General Taraghai. This was, unfortunately for Alauddin, immediately after his long battle with and victory over the kingdom of Chittor. That Alauddin was busy with his attack on Chittor was known to Taraghai, and was one of the key factors in his planning. Alauddin was taken completely by surprise. His army was greatly depleted and had suffered great losses in equipment in the battle for Chittor. He tried to get reinforcements from other parts of the empire, but the Mongols had blocked all the roads to Delhi.
Yet Alauddin did not lose heart, and fought a gallant defensive battle. Lal explains it thus:

“Sultan Alauddin gathered together whatever forces he had in the capital, and arrayed his forces in the plains of Siri. As it was impossible to fight the Mongols in an open engagement with so small an army, Alauddin decided to exhaust the patience of the besiegers by strengthening his defence lines. On the east of Siri lay the river Jamuna, and on the south-west was the old citadel of Delhi, although by the time of Taraghai’s invasion it had not been repaired. In the south lay the dense jungle of Old Delhi. The only vulnerable side, therefore, was the north, where the Mongols had pitched their camp.”

Alauddin dug trenches and built ramparts and created a strong defensive position that made it impossible for Taraghai to defeat him. After two months of trying hard to break Alauddin’s defences, Taraghai lost patience and returned home. This was clearly brilliant generalship under extremely adverse circumstances which would have meant certain defeat for anyone who was not as resolute and as resourceful.

This close shave made Alauddin realize the need for stronger defence of the capital, and he took various measures, such as constructing a wall, repairing forts, and the like. As a result, Delhi was never again at risk of conquest by the Mongols.

In 1305 CE, seeking to avenge their previous defeats, the Mongols invaded again, under the leadership of Taraghai, Ali Beg, and Tartaq, with a force of 50,000 horsemen. Taraghai was killed in a preliminary clash even before arriving in Delhi, but Ali Beg and Tartaq pushed on. Knowing Delhi to be strongly defended, they started plundering the countryside of Avadh. Alauddin sent a force of 30,000 to 40,000 horsemen with the general Malik Nayak to meet the Mongols and inflicted a crushing defeat on them on December 30, 1305. Twenty thousand horses belonging to the enemy were captured, and most of the soldiers were slaughtered. 8000 prisoners of war were brought to Delhi, including the two generals, who were subsequently beheaded.

The last attempt to invade the Delhi Sultanate was made by Duwa in 1306 CE, just before his death, when he sent the generals Kubak and Iqbalmand with an army of 50,000 to 60,000 horsemen. Kubak advanced in the direction of the Ravi river, and Iqbalmand advanced in the direction of Nagor. Alauddin dispatched his favorite general, Malik Kafur, to deal with the Mongols. Kafur defeated Kubak in a battle on the Ravi and captured him alive. He then intercepted the second force at Nagor and defeated that as well. Only 3000 or 4000 soldiers remained of the Mongol invasion force.


Thus, Alauddin Khilji achieved what no other ruler in the world, east or west, had achieved. He repeatedly repulsed and defeated large-scale invasions by the Mongols, who had been an unstoppable force wherever they had gone — Russia, China, Persia, Iraq, Syria, Europe. He was able to repel forces of up to 200,000 Mongol horsemen. In comparison, the force that Hulagu took with him to Baghdad and used to completely destroy the Caliphate had only 150,000 horsemen.

The Mongols had not become weak and feeble since the sack of Baghdad in 1258 – this was not the reason for Alauddin’s success. As an illustration, his uncle who preceded Alauddin as Sultan of Delhi preferred to “make a settlement, giving the Mongols very favourable terms”, to use Lal’s words. Alauddin’s own advisors advised him in 1299 CE to submit rather than fight the feared Mongols; but Alauddin Khilji proved superior to his formidable Mongol foes.

Khilji’s legacy to the Indian subcontinent

From the knowledge of how other countries fared under the Mongols, it is fair to say that had the Mongols conquered India, India would have likely been set back at least two or three hundred years in its development. A large part of the knowledge and culture that had been accumulated in India over millenia might well have been destroyed. Every library, school, temple, mosque and even home would have likely been burnt to the ground. As the Russian experience shows, even if the Mongols had settled down in the Indian subcontinent (an unlikely proposition, given the hot Indian weather), the consequences for India would probably not have been savoury.

So the Mongols were not like any other invader. If Khilji had lost to the Mongols, the outcome would not have been as benign as when Ibrahim Lodi lost to Babur. In that case, one ‘foreign’ ruler who had recently made India his home was replaced by another, but the Indian subcontinent itself did not suffer greatly. If the Mongols had won against Khilji, they would probably have wiped a large percentage of India’s cultural heritage off the map of the world. If we have ancient traditions in India that survive to this day, a large part of the credit for that has to go to Alauddin Khilji, one of history’s greatest warrior-kings.

By all accounts, Alauddin Khilji was not a benevolent king to his subjects. But he also was a brave soldier and a brilliant general who saved the Indian subcontinent from certain destruction. Of course, Khilji did not resist the Mongols to save Indian culture and civilisation; he did what he did to save himself. But that is true of every ruler who defends their kingdom against a foreigner, whether that be Shivaji, Rana Pratap, or Laxmibai of Jhansi.

These days, it is becoming increasing common to paint one-dimensional portraits of people: “Hindu hero,” “Islamic tyrant,” “Islamic hero,” etc. But the problem with such stereotypes is that people are not monolithic — they are complex and layered. The man you hate as a Muslim bigot may also be the reason you are a Hindu today.

Was Alauddin Khilji a bigot?

The story of Alauddin Khilji shows us that we need to understand history in its entirety. Just as most Indians are unaware of Alauddin Khilji’s role in stopping many Mongol invasions, even the image of Khilji as someone who persecuted Hindus is based on an incomplete understanding of history.

To be sure, Khilji was an extremely cruel, suspicious and vindictive man, and meted out barbaric punishments to those who antagonised him. But his cruelty was impartial, and made no distinction between Hindus and Muslims.

Historians are generally agreed that while Alauddin Khilji was a cruel despot, he was not a bigot. He was a pragmatist.