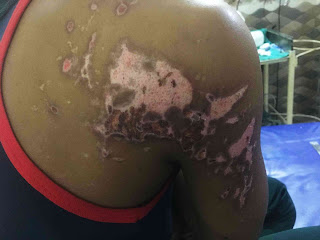 “It was as if someone threw boiling hot water on me,” said the 23-year-old. He removed his shirt to reveal flesh-coloured scabs that stretched from the right side of his upper back to his right ear and down his right arm. He could not stop himself from scratching the wounds, which itched madly as they healed.

Nearly 20 days after rioting mobs in North East Delhi’s Khajuri Khas area flung acid on him, the pain is still fresh in his mind. “I cried so much,” he said “I do not know what they would have done to me if they caught me.” He is still so fearful he does not want to reveal his name.

From February 23 to 26, violence engulfed neighbourhoods in North East Delhi. What started as a clash between groups protesting against the new Citizenship Amendment Act and those supporting it turned into communal violence, much of it directed against Muslims. At least 53 were killed in the violence and hundreds injured.

For days, hospitals in Delhi were flooded with the dead and the injured. Their injuries told the story of the violence: gunshot wounds, stabs and burns. Some also bore wounds that spoke of acid attacks. At Al Hind Hospital in North East Delhi’s Mustafabad, at least three cases are marked as “acid attack”. Guru Teg Bahadur Hospital in Dilshad Garden recorded four such cases, Newslaundry reported.

MA Anwar, founder of Al Hind Hospital, told Scroll.in that the chemical substance used was “strong acid”. He classified some of the injuries sustained by victims as second degree burns. “The body mass melted away and the injuries were very deep,” he said. “Most of these patients still come to change their dressing.”

‘Ammi, my eyes are burning’
At the relief camp set up in the Mustafabad Eidgah, 20-year-old Anam is recovering from her injuries. “It itches more than it hurts,” she said. The lower part of her face and her neck bear scars, acquired when marauding mobs allegedly attacked their house in Shiv Vihar on February 25.

They lived in Gali Number 13 in Shiv Vihar’s Phase 6, down the road from Medina Masjid, which was also desecrated in the violence. The family ran a grocery store from the ground floor of the two-storeyed house. Anam’s mother, 40-year-old Mumtaz Begum, recalls hearing gas cylinders bursting on the main road running through the neighbourhood on February 25. Around 8 pm, Mumtaz recounted, her husband, 52-year-old Mohammad Waqil, went up to the terrace to see if the violence had stopped.

“I told him we should leave but he said, ‘Are you mad? This is our house, we have our family and our goats here – where will we go?’” Mumtaz said. “He said we would leave only after we saw what was happening from the terrace.”

There was no electricity that night, Mumtaz said, so her daughter, her husband and she climbed to the terrace in darkness. As Waqil and Anam looked out from the terrace, she waited inside in the staircase.

Anam said she heard the mobs chanting “Jai Shri Ram!” and Mumtaz said she could see smoke billowing out from houses in the neighbourhood – “there was fire everywhere”. Within minutes, a glass bottle landed on Waqil’s face, spilling acid on his eyes and on Anam’s mouth, chin and neck, Mumtaz said.

“I could not see if the acid came from below or from the front but it was so quick,” Mumtaz said. “We had not even been up there for 10 minutes. It was very sudden.”

Once the acid touched her face, Anam ran towards her mother. “I thought dirt had got into my eye but it was acid,” she said. Her mother wiped the substance off Anam’s face with her scarf. “She kept saying ‘Ammi, my face is burning’,” recalled Mumtaz.

Waqil, however, was rooted to the spot. As Mumtaz went closer, she said, she saw blood oozing from his face. “I could not understand where the blood on his face came from,” she said.

That was when the family, including Anam’s brothers, 18-year-old Mohammad Wasim, 14-year-old Mohammad Naseem and their uncle, Shakeel, decided it was time to leave their home. The six of them and another neighbour began to walk towards Medina Masjid.

The mosque was deserted, save for another neighbour who said he was trapped there, Mumtaz recalled. The family hid in the mosque even as mobs bore down on it, setting gas cylinders alight. Till 2am that night, Mumtaz kept calling the police on 100 but no one answered her calls. Meanwhile, Waqil had fallen silent. In despair, Mumtaz said, she started to pray: “I was praying to Allah to get us out of there safely or bury us along with the debris of the mosque.”

Around 3am, the family decided to venture out of the mosque. A neighbour had called and asked them to reach the main road running through the neighbourhood and walk towards Chaman Park, a Muslim-majority locality nearby. “When we got out, we saw everything was vandalised and burning,” Mumtaz said.

At 5am on February 26, Mumtaz called an ambulance from Chaman Park. It was to take Waqil and Anam to the Lok Nayak Jai Prakash Narayan Hospital at Delhi Gate. Anam was discharged on February 29. Waqil continues to receive treatment at the hospital.