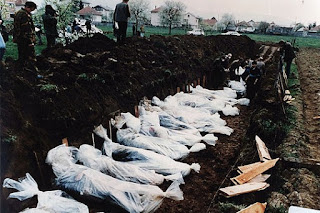 Israel’s Supreme Court last month rejected a petition to reveal details of Israeli defense exports to the former Yugoslavia during the genocide in Bosnia in the 1990s. The court ruled that exposing Israeli involvement in genocide would damage the country’s foreign relations to such an extent that it would outweigh the public interest in knowing that information, and the possible prosecution of those involved.

The petitioners, Attorney Itay Mack and Professor Yair Oron, presented the court with concrete evidence of Israeli defense exports to Serbian forces at the time, including training as well as ammunition and rifles. Among other things, they presented the personal journal of General Ratko Mladić, currently on trial at the International Court of Justice for committing war crimes, crimes against humanity, and genocide. Mladić’s journal explicitly mentions Serbia’s ample arms ties with Israel at the time.

The exports took place long after the UN Security Council placed an arms embargo on various parts of the former Yugoslavia, and after the publication of a series of testimonies exposing genocide and the creation of concentration camps.

The Israeli State Attorney’s reply and the court’s rejection of the petition are a de facto admission by Israel that it cooperated with the Bosnian genocide: if the government had nothing to hide, the documents under discussion would not pose any threat to foreign relations.

Between 1991 and 1995 the former Yugoslavia shattered, going from a multi-national republic to an assemblage of nations fighting each other in a bloody civil war that included massacres and ultimately genocide.

The Serbs waged war against Croatia from 1991-1992, and against Bosnia from 1992-1995. In both wars the Serbs committed genocide and ethnic cleansing of Muslims in the areas they occupied, leading to the deaths of 250,000 people. Tens of thousands of others were wounded and starved, a multitude of women were raped, and many people were incarcerated in concentration camps. Other parties to the conflict also committed war crimes, but the petition focuses on Israel’s collaboration with the Serbian forces. The horrendously cruel acts in Yugoslavia were the worst Europe had seen since the Holocaust.

One of the most notorious massacres was perpetrated by soldiers serving under Serbian General Ratko Mladić around the city of Srebrenica in July 1995. Serbian forces commanded by the general murdered about 8,000 Bosnians and buried them in mass graves in the course of a campaign of ethnic cleansing they were waging against Muslims in the area. Although the city was supposed to be under UN protection, when the massacre began UN troops did not intervene. Mladić was extradited to the International Court of Justice at The Hague in 2012, and is still on trial.

At the time, prominent Jewish organizations were calling for an immediate end to the genocide and shutting down the death camps. Not so the State of Israel. Outwardly it condemned the massacre, but behind the scenes was supplying weapons to the perpetrators and training their troops.

Attorney Mack and Professor Oron have gathered numerous testimonies about the Israeli arms supply to Serbia, which they presented in their petition. They provided evidence of such exports taking place long after the UN Security Council embargo went into effect in September 1991. The testimonies have been crossed-checked and are brought here as they were presented in the petition, with necessary abbreviations.

In 1992 a former senior official of the Serb Ministry of Defense published a book, The Serbian Army, in which she wrote about the arms deal between Israel and Serbia, signed about a month after the embargo: “One of the largest deals was made in October 1991. For obvious reasons, the deal with the Jews was not made public at the time.”

An Israeli who volunteered in a humanitarian organization in Bosnia at the time testified that in 1994 a UN officer asked him to look at the remains of 120 mm shell — with Hebrew writing on it — that exploded on the landing strip of the Sarajevo airfield. He also testified that he saw Serbs moving around in Bosnia carrying Uzi guns made in Israel.

In 1995 it was reported that Israeli arms dealers in collaboration with the French closed a deal to supply Serbia with LAW missiles. According to reports from 1992, a delegation of the Israeli Ministry of Defense came to Belgrade and signed an agreement to supply shells.

The same General Mladić who is now being prosecuted for war crimes and genocide, wrote in his journal that “from Israel — they proposed joint struggle against Islamist extremists. They offered to train our men in Greece and a free supply of sniper rifles.” A report prepared at the request of the Dutch government on the investigation of the Srebrenica events contains the following: “Belgrade considered Israel, Russia and Greece its best friends. In autumn 1991 Serbia closed a secret arms deal with Israel.”

In 1995 it was reported that Israeli arms dealers supplied weapons to VRS — the army of Republika Srpska, the Bosnian Serb Army. This supply must have been made with the knowledge of the Israeli government.

The Serbs were not the only party in this war to which the Israeli arms dealers tried to sell weapons. According to reports, there was also an attempt to make a deal with the anti-Semitic Croatian regime, which eventually fell through. The petition also presented reports by human rights activists about Israelis training the Serb army, and that the arms deal with the Serbs enabled Jews to leave Sarajevo, which was under siege.

While all of this was taking place in relative secrecy, at the public level the government of Israel lamely expressed its misgivings about the situation, as if this were some force majeure and not a manmade slaughter. In July 1994, then-Chairman of the Israeli Knesset’s Foreign Relations and Defense Committee MK Ori Or visited Belgrade and said: “Our memory is alive. We know what it means to live with boycotts. Every UN resolution against us has been taken with a two-thirds majority.” That year, Vice President of the US at the time, Al Gore, summoned the Israeli ambassador and warned Israel to desist from this cooperation.

Incidentally, in 2013 Israel had no problem extraditing to Bosnia-Herzegovina a citizen who immigrated to Israel seven years earlier and was wanted for suspicion of involvement in a massacre in Bosnia in 1995. In other words, at some point the state itself recognized the severity of the issue.