Solidarity for Sikhs after Afghanistan massacre 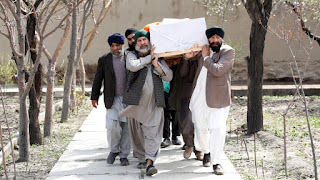 Sutaka described the chain of events on Wednesday for Al Jazeera.

"I was here at the Karte Parwan Gurudrawa when we heard about the attack at Shor Bazaar around 7:30am. The morning prayers had just gotten over and prasad was being distributed. There were also snacks for the gathering and many were waiting to be served when two gunmen stormed inside," he said, sharing a story pieced together from those who survived.

"They first threw bombs and then started firing bullets at the people. The massacre went on for six hours," he said.

While the armed group ISIL (ISIS) claimed responsibility of the attack, government sources said it was conducted by the Haqqani Network, and could have been in retaliation for recent violence against Muslims in India.

"The Taliban and other terrorist groups sponsored by the governments in our region have in the past also attacked our society and tried create divisions among people," alleged Javid Faisal, spokesperson at the Afghan National Security Council.

"Such past events instill fear and insecurity within the community and can affect the unity of the nation, too," he said.

On Wednesday evening, Hamdullah Mohib, the national security advisor, visited survivors and their families to offer his condolences and promised to investigate the attacks, Sutaka said.

Despite the grim situation, the community is not alone in their grief, and messages of solidarity have poured in from every corner of Afghanistan.

"They are more Afghan than a lot of other Afghans," said Sahira Sharif, a member of parliament from Khost Province, which was once home to hundreds of Sikh families.

While only a handful of Sikhs remain, Sharif said she has fond memories of growing up in a multicultural society.

"There was a lot of bonhomie and cordiality between the Muslims, Sikhs and Hindus in Khost. We socialised with each other and, growing up, they would come to our houses and we would go to theirs," she recalled to Al Jazeera, adding that the Sikh community was so trusted that other Afghans would save their money with them, in the absence of a bank.

Later, when Sharif was campaigning for a parliamentary seat, many Sikhs backed her. "When I was running for the 15th round of elections, I went to their neighbourhood and met with the women of the community. They campaigned for me, they hosted me for lunch and I could see their cultures and practices remained very close to that of other Khostis," she said.

Samira Hamidi, an Afghan activist and regional campaigner at Amnesty International, said: "The Sikh community of Afghanistan are among the most resilient, peaceful and country-loving citizens. There are so many of them who have preferred living in Afghanistan despite all the threats against them."

This deep social connection has elevated a collective grief among Afghans, irrespective of their faith and beliefs.

"Yesterday's attack on our Sikh brothers and sisters is inhumane and cowardice. It is painful to hear the father whose three-year-old daughter was shot in front of him," she added, visibly disturbed at the tragedy of Harinder Singh Khalsa, who lost seven members of his family, including his wife, mother and daughter.

Hamidi, like many Afghan Muslims, extended her solidarity to the Sikhs.

"At this painful time, all I can say is we need to stand with them, share their grievances and comfort them. I have huge respect for each of them for the love and compassion they have for Afghanistan, and I wish no one, including them, to have to face the tragedies like yesterday anymore," she said.