'We are not safe': India's Muslims tell of wave of police brutality 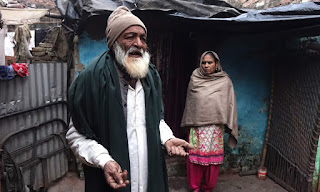 “The maulana told the policemen gently that none from the seminary took part in any protest rally and pleaded for them not to vandalise the Qur’an centre in the madrasa,” said a neighbour who witnessed the police attack but did not want to be identified for fear of reprisal. “It was then that the policemen and Rapid Action Force personnel [a branch of the police that deals with crowd control] pounced on him.”

The police then rounded up Hussaini and 35 of his students, 15 of whom were under 18 and mostly orphans, and took them to a nearby police barracks. Here the cleric was, witnesses allege, stripped of his clothes, beaten and a rod shoved up his anus, causing rectal bleeding, while the students were allegedly tortured with bamboo rods and made to shout Hindu nationalist slogans Jai Shri Ram” [Hail Lord Ram] and “Har Har Mahadev” [Save us Lord Shiva].

“The maulana had been beaten up very badly and was left without a single cloth on his body and when he was released we found him in very bad shape,” said Salman Saeed, a local Congress leader who came to pick up Hussaini and several students from Civil Lines Barracks. “He was badly wounded and bloodied, with many bruises across his body. He could not stand up on his legs and was bare-bodied. We were shocked to see the maulana in that condition. He is bed-ridden now.”

While Hussaini and all his underage students were released at 2am that night, 12 adults students and the madrasa cook remain behind bars and have been charged with taking part in violence, despite never partaking in a protest.

The young students were not the only underage Muslim prisoners in Muzaffarnagar police barracks that night. Upon seeing the commotion in the streets, 14-year-old Mohammad Sadiq, who worked as a mason’s assistant, set out to find his 11-year-old brother. Cars and motorcycles had been set alight and as protesters were fleeing around him, he too began to run. It was then that a dozen police pounced on him, hitting his legs with batons to make him fall to the ground and then unleashing a torrent of blows, he said.

“The police said to me, ‘if you tell us the names of 100 Muslims involved in the riots we will stop beating you’,” recounted Sadiq, as he lay bed-bound and weak from his injuries in his one-room family shack. “I kept telling them I had nothing to do with the riots, that I did not know anything but they kept beating me. The policemen told me to shout ‘Jai Sri Ram’ and I told them I would not so they put an iron rod into the flames of the car that was on fire and then held it against my hands to burn me.”

“Then some of the police officers tried to pick me up and put me in the flames of the car on fire,” Sadiq said, “but two of them said ‘no, let’s just take him to the police station’.”

Sadiq was kept in police detention for the next four days. Stripped to his underwear, he said he was tortured. For two days he was given no food or water and no medical treatment for his badly bleeding wounds. When he was finally released his condition was so bad his mother, Rehana Begum, fainted when she came to collect him.

“His father is dead so he was the only earning member of this house but he has been beaten so badly across the knees he can not walk and can not work now so what will happen to us?” she said, her head in her hands.