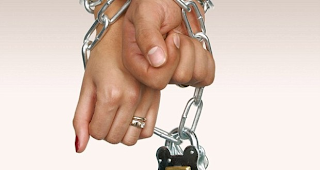 A mother who forced her daughter to marry a relative almost twice her age has been sentenced to four-and-a-half years in prison.
The woman from Birmingham, who is in her 40s, duped the then 17-year-old into going to Pakistan in September 2016 to wed the man.
The girl became pregnant by him when she was 13 and he was 29, which her mother saw as a "marriage contract".
The case is the first successful prosecution of its type.
Sentencing the mother at Birmingham Crown Court, Judge Patrick Thomas QC said the victim had been "sold for her passport".
Neither the mother nor daughter can be identified for legal reasons.
Jurors had heard the daughter, now aged 19, was fooled into travelling to Pakistan on the promise of getting an iPhone for her 18th birthday.

When the plan to marry her to the relative 16 years her senior was revealed, the girl protested. In response her mother threatened to burn her passport and assaulted her.
"It takes no imagination to understand the terror she must have felt", the judge said.
"You had cruelly deceived her. She was frightened, alone, held against her will, being forced into a marriage she dreaded.
"You must have known that was her state of mind. Yet for your own purposes, you drove the marriage through."
Prosecutor Deborah Gould read a victim statement to the court in which the girl said she was proud of herself for coming forward and wanted other young women who found themselves in similar situations to ask for help.
The court heard how the wedding was the defendant's idea. The victim's father, who is divorced from her mother, eventually found out and told social services and police.
The mother was found guilty on Tuesday of two counts of forced marriage and a count of perjury after she lied to the High Court about the incident.
Link