Islam and Muslims in Japan 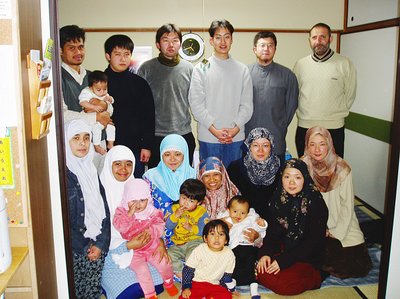 Contrary to popular belief, Islam in Japan is growing, mainly due to indegeneous Japanese people reverting to Islam.

Professor Tanada from the Faculty of Human Sciences, Waseda University says the following:


Japan, which is also a Muslim-minority country, also experienced a growth in Muslim population during the bubble economy. Based on the data of 2016, there are currently approximately 120,000 Muslims from overseas and 10,000 Japanese Muslims living in Japan. Although most Muslims in Japan lives in the three major metropolitans areas of Japan (Greater Tokyo Area, Chukyo Metropolitan Area and Kinki Region), the Muslim network has never ceased expanding throughout Japan.

Since the beginning of 1990s, there has been increasing number of mosques being built across the Japanese archipelago, including Hokkaido and Okinawa prefectures. Even though there are currently over 90 mosques throughout Japan, most Japanese are not aware of it. Nevertheless, as there is an increasing number of movements and initiatives to promote understanding in Islam and Muslims in recent years, more and more mosques are accepting tours and organizing events for Japanese to participate.

It is estimated that the population of Muslims will continue to grow in Europe and Japan, however, the growth does not only lies in the number of Muslim immigrants. In countries like England, half the population of the Muslim community are born and raised in these countries. Even in Japan, about half of the permanent Muslim residences have settled down and build a family, suggesting that Japan will see an increase in the number of second and third generation Muslims in the near future. These Muslims are going to be “hybrid Muslims” that will be exposed to diverse cultural background. They will be the key people to bridging the local community with the Muslim community. I hope that when we meet them in the near future, we will be able to learn and work together in harmony.


TRT world did a feature on Tokyo Mosque Iftar here. The following is a video from that feature


Learn more about Islam and Muslims in Japan at Islam Awareness Homepage: Japan

Email ThisBlogThis!Share to TwitterShare to FacebookShare to Pinterest
Labels: Japan