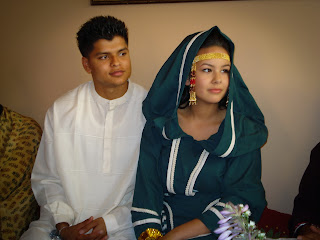 As a young Inuk woman, Maatalii Okalik-Syed is exceptional in many ways.
From a very early age, the 21-year-old native of Pangnirtung, Nunavut committed herself to helping others. She’s worked with several grassroots Aboriginal and Inuit organizations, all the way up to the Government of Nunavut. And now she’s set to graduate from Carleton University with a Human Rights and Political Science degree, minoring in Aboriginal Studies.
But an impressive resume is not the only thing that sets Maatalii apart. Maatalii is a Muslim, one of a small but growing number of Indigenous women in Canada converting to a religion most associate with the Middle East.
It’s not known exactly how many have converted, but some Indigenous Muslims report seeing more and more people like them praying at Ottawa-Gatineau mosques. People like Linda Soliman. A Cree woman originally from Fort Albany in northern Ontario, she credits Islam with strengthening her parenting skills and improving the relationship with her parents.
“You’re not the first person to ask,” laughs Maatalii as she tells the story of how she became a Muslim.
“I grew up in the eastern part of Ottawa. The elementary school I went to had people from different cultures and backgrounds and from different faiths,” Maatalii explains. “Same thing during middle and high school.”
And it was during high school that she would first become curious about her future faith. There to help answer her many questions about Islam was Bengali friend and classmate Ashique Syed.
Her religious curiosity only continued to grow when, by 2004, Maatalii accepted Islam as her new way of life. Four years later, she and Ashique married.
The ceremony took place in his family home. “It was a wonderful wedding, a mixture of both cultures,” says Maatalii.
But Maatalii admits the fact they were from different cultures did cross her mind, aware that, “traditionally, Bengali people would marry other Bengali,” she says.
There was also the language barrier to consider. “It was definitely a learning curve,” says Maatalii. “I’m picking up a lot of Bengali and he is taking Inuktitut language classes. We work together to make it work for both of our families,” she adds.
Such cultural support even goes beyond each other’s families. “I’ve done a lot of leadership work in the (Inuit) community and every step of the way he was doing it with me,” she notes. Last year, the couple went to her home community of Pangnirtung.
“We went fishing, and we caught 4 or 5 seals, and we also went caribou hunting. He actually skinned the caribou,” shares Maatalii. “Once school is done, we have wishes to go back there.”
In other parts of the world, the relationship between Indigenous peoples and Islam is more pronounced.
In Australia, one estimate pegs the number of Aboriginal Muslims at 1,000, enough to support more formal organizations like the Indigenous Muslim Support Network. And in Central America, Islam is gaining a foothold among some Mayans.
For Maatalii, news that other Indigenous people in Canada and around the world are converting to Islam comes as no surprise.
“It’s a religion of peace.”
source
Posted by Zafar Khan at 09:00