An Afghan Tragedy: The Pashtun practice of having sex with young boys 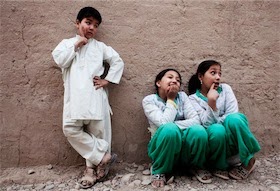 Patriarchal tradition will always ignore and subvert Islam to exacerbate oppression and maintain the status quo.


Since its post-2001 revival, bacha bazi has evolved, and its practice varies across Afghanistan. According to military experts I talked to in Afghanistan, the lawlessness that followed the deposing of the Taliban's in rural Pashtunistan and northern Afghanistan gave rise to violent expressions of paedophilia. Boys were raped, kidnapped and trafficked as sexual predators regained their positions of regional power. As rule of law mechanisms and general order returned to the Afghan countryside, bacha bazi became a normalized, structured practice in many areas.
Many “chai boys” are now semi-formal apprentices to their powerful male companions. Military officials have observed that Afghan families with an abundance of children are often keen to provide a son to a warlord or government official — with full knowledge of the sexual ramifications — in order to gain familial prestige and monetary compensation. Whereas bacha bazi is now largely consensual and non-violent, its evolution into an institutionalized practice within rural Pashtun and Tajik society is deeply disturbing.
The fact that bacha bazi, which has normalized sodomy and child abuse in rural Afghan society, developed within a deeply fundamentalist Islamic region of the world is mystifying. According to a 2009 Human Terrain Team study titled “Pashtun Sexuality,” Pashtun social norms dictate that bacha bazi is not un-Islamic or homosexual at all — if the man does not love the boy, the sexual act is not reprehensible, and is far more ethical than defiling a woman.
Sheltered by their pastoral setting and unable to speak Arabic — the language of all Islamic texts — many Afghans allow social customs to trump religious values, including those Quranic verses eschewing homosexuality and promiscuity. Warlords who have exploited Islam for political or personal means have also promulgated tolerance for bacha bazi. The mujahideen commanders are a perfect example of this — they fought communism in the name of jihad and mobilized thousands of men by promoting Islam, while sexually abusing boys and remaining relatively secular themselves.